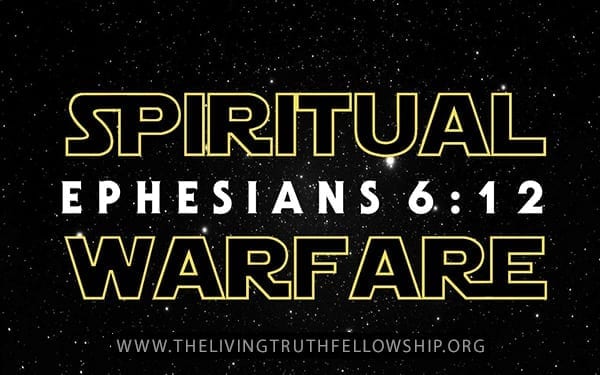 In our most recent USA presidential election, many “conservative,” “evangelical,” “Bible believing” Christians voted for Donald Trump, some enthusiastically, and some because they saw him only as the lesser of two evils. Since his inauguration, he has been at the center of a maelstrom of controversy, some would say due to malevolent forces bent on taking him out of his position as the U.S. Commander-in-Chief. Others would say he is just another in the unbroken line of deceitful politicians who have quickly discarded their campaign promises once in office. Meanwhile, the level of vitriol on the part of some anti-Trumpeters has reached enormous proportions.

For those not totally detached from the political process, and who want to see freedom and prosperity in the USA, it is easy to become overly consumed in the conflict, and in trying to ferret out which news sources are credible and what is really going on. In this letter, I hope to remind you that, as per Ephesians 6:12, “Our struggle is not against flesh and blood, but against the rulers, against the authorities, against the powers of this dark world and against the spiritual forces of evil in the heavenly realms.” That means our only possible victory is in Jesus. Right on.

Satan, the Commander-in-Chief of these demons, is a real pro at distracting Christians from our true mission. One of his primary ploys is to divide and conquer, which he does by setting various groups against one another, e.g., Republicans vs. Democrats, blacks vs. whites, rich folks vs. poor folks, city mice vs. country mice, etc., etc. And all of that is nothing but a smokescreen to obscure from our citizenry the real issues behind the scenes, and to stop us believers from carrying out our ministry of reconciliation as Ambassadors for Christ.

What does the Bible tell us about government? First, as we lay out in One Day With The Creator and The End Times, we see in Genesis 9 the origin of Civil Government, which has been anything but civil. Governmental authority was God’s idea, so that evil people could not run wild and murder His people. Then we see in Genesis 11 the Devil’s initial attempt at establishing a one-world government in order to enslave all people except those at the top who are sold out to him. God thwarted that first attempt by scattering the people and confusing their languages, but Satan has never stopped working toward his goal of world domination, and at this point in 2017 he has gained a lot of momentum and made a lot of progress. The bad news for him—and the good news for us—is that he is fighting against GOD ALMIGHTY and THE LORD JESUS CHRIST, who are constantly working for our good. And no matter what happens along the way, we can rest in the absolute assurance that WE WIN!

As per Satan’s unoriginal machinations, his one-world government and “peace on earth” idea (which he will eventually, but only temporarily, achieve) is nothing but a counterfeit of what God had already conceived and later announced in the Hebrew Scriptures. There will be a “New Age,” a one-world government, with real peace on earth. But God’s government, which will come to power when the Lord Jesus Christ (with our help) destroys Satan’s brief ersatz ruler-ship, will be a theocracy, the Millennial Kingdom with then King Jesus ruling the earth from the Promised Land.

Judge Jesus will then begin with the Sheep and Goat Judgment recorded in Matthew 25 (and 1000 years later consummate his sifting of all men at the White Throne Judgment) and do what earthly governments were supposed to do all along—judge righteously and exterminate wicked people so that the rest of us can finally have some peace around here.

In the Christian Scriptures, Romans 13:1-7 addresses the basic truth as to the concept of civil authority and why God instituted it. It is not saying that any particular politician is whom God placed in power, nor that we Christians are to obey ungodly laws (Acts 5:29). 1 Peter 2:13-17 reiterates some of those truths about doing all we can to be good citizens. And, as you probably know, 1 Timothy 2:1-2 exhorts us to pray “for kings and all those in authority, so that we may live peaceful and quiet lives in all godliness and holiness.” The sad truth is that virtually every government in history has featured many psychopaths who have abused people to the max. So our prayers can be for God to stop those criminals and replace them with someone less psychotic.

You may be familiar with the work of E. W. Bullinger, a superb English Bible scholar who lived from 1837-1913, and who during that time, sans computer and maybe even typewriter, produced an incredible wealth of biblical work, much of which, via a long and winding road, became part of the foundation upon which the work of TLTF is based. One of his great works was The Apocalypse, a study of the Book of Revelation. Allow me to quote some of what I believe is pertinent to the topic of this letter (my emphasis in bold type).

Government in the world, committed for the present to man, has never yet been exercised for God… It is folly to talk about “Christian kingdoms” or “Christian nations;” and it is worse than folly for ministers of the Gospel to occupy themselves with the taming of these wild beasts, instead of warning all of the coming judgments, which will destroy them altogether; and meantimewitnessing of the “grace of God” to lost and helpless sinners.

We are not referring to any lawful acts that we may do (as it were, in passing) to improve the condition of things, or to remove crying evils; but we are speaking of laying ourselves out for these things and making them our great aim; and especially of ministers of the Gospel so doing. What is wanted is…[that] men are told of what God’s verdict is on all these things; of what His remedy for them is; and of what means He is going to take to set right all that is so wrong…[that] men are told that there can be no Millennium without Christ; and that there is no hope for the world until it comes under the direct [jurisdiction] of God and of His Anointed.

The very laws that God gave on Sinai, and the Divine Ritual of the Tabernacle and the Temple did not keep Israel from religious apostasy and political ruin. It ought therefore to be perfectly clear that there is no hope for the world in human laws or religions. Righteous government is the one great want of the whole world.

But man does not know or see (and there are so few to tell him) that there can be no righteous government for the world until the Righteous One shall come, “whose right it is” (Ezek. 21:27) to rule in righteousness: and no peace for the earth until the Prince of Peace, whom man hath foully murdered, shall return to establish it. When he came, his object was angelically heralded as “peace on earth” (Luke 2:14); but when He had been rejected, his disciples knew there could be no “peace on earth” while the blood of the Prince of Peace cried for vengeance, and hence they sang of “peace in heaven” (Luke 19:38). That is where our peace now is (Eph. 2:14-17); and peace is now preached to sinners and rebels.

Righteous Government must wait until Revelation 11:15: “And the seventh angel sounded his trumpet; and there were loud voices in heaven; saying, ‘The kingdoms of the world are become the kingdoms of our Lord, and of His Christ; and He shall reign for ever and ever’” (Exod. 15:18; Ps. 10:16; Dan. 2:44, 7:14). The whole subject is one of [jurisdiction]. This is the whole matter that has been in question, and this question is now about to be settled by these final judgments of the seven vials. The result is celebrated in this vision “in heaven” by anticipation. It looks forward to the close of the whole book of Revelation. It is not till the events of Revelation 20 have taken place that this change of

is consummated. “The kingdoms of the world” are represented as wild beasts, knowing no master and having no owner. This is God’s view of all earthly governments.

So what is to be our focus? Given the coming judgment of all men, first Christians—for rewards, and then those believers who lived before Christ came—for their rewards, and finally all the rest of mankind—for life or death, what is our daily mission?

2 Corinthians 5:10-11
10 For we must all appear before the judgment seat of Christ, so that each of us may receive what is due us for the things done while in the body, whether good or bad. 11 Since, then, we know what it is to fear the Lord, we try to persuade others. What we are is plain to God, and I hope it is also plain to your conscience.

Via Paul, the Lord Jesus speaks to some of our former brethren, and his words still ring true for us today.

2 Thessalonians 1:3-10
3 We ought always to thank God for you, brothers and sisters, and rightly so, because your faith is growing more and more, and the love all of you have for one another is increasing. 4 Therefore, among God’s churches we boast about your perseverance and faith in all the persecutions and trials you are enduring. 5 All this is evidence that God’s judgment is right, and as a result you will be counted worthy of the kingdom of God, for which you are suffering. 6 God is just: He will pay back trouble to those who trouble you 7 and give relief to you who are troubled, and to us as well. This will happen when the Lord Jesus is revealed from heavenin blazing fire with his powerful angels [Matthew 24-25]. 8 He will punish those who do not know God and do not obey the gospel of our Lord Jesus. 9 They will be punished with everlasting destruction and shut out from the presence of the Lord and from the glory of his might 10 on the day he comes to be glorified in his holy people and to be marveled at among all those who have believed. This includes you, because you believed our testimony to you.

Somewhat like the Israelites were looking for a Messianic “politician” to save them from Roman domination, some Christians today are placing too much stock in men with feet of clay. No matter how much good he may do, neither Donald Trump nor any other politician is in any way our Savior. Only the Lord Jesus fills that role, and it is he whom we are to serve in this dying world. His words to Timothy encourage us to find our strength in him, avoid all distractions, and hold forth the magnificent Truth of God’s Word.

2 Timothy 2:1-4
1 You then, my son, be strong in the grace that is in Christ Jesus. 2 And the things you have heard me say in the presence of many witnesses entrust to reliable people who will also be qualified to teach others. 3 Join with me in suffering, like a good soldier of Christ Jesus. 4 No one serving as a soldier gets entangled in civilian affairs, but rather tries to please his commanding officer.