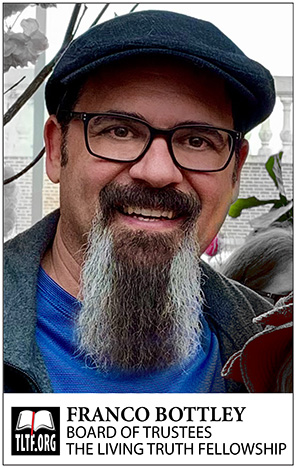 Franco Bottley grew up in the Catholic church. He went to Catholic school, was an altar boy, was commissioned by the bishop, and graduated from Saint Leo University. After 16 years of Catholic education he came to a startling conclusion. He knew absolutely nothing about the Bible! This realization came after attending his first-ever home Bible fellowship and hearing the manifestations of holy spirit. This experience changed the course of his life forever.

Since that time Franco has been studying and teaching the Bible for the past 38 years. Two passions have directed his life and ministry: an unwavering commitment to the rightly divided Word of God and seeing lives transformed by God's grace and love. His passion models the contagious joy that springs from enthusiastically following after Jesus Christ his Lord.

Franco is married to Christina, the biggest blessing ever and love of his life. He is a dedicated and devoted father of three children, Anthony, Ciara, and baby Gianni.

Franco has a passion for performing in musical theater, riding his Harley Davidson motorcycle, mountain climbing, snow skiing, and adventurous traveling. He is an accomplished Videographer and Graphic Artist and is dedicated to using his talents to communicate God’s Word in a visually powerful way. Franco is an ordained minister and founding member of the Board of Trustees, and has served as Chairman of the Board and CEO since 2012. 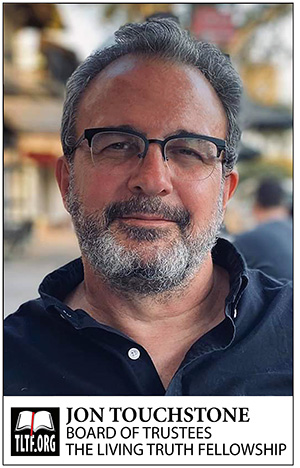 Jon Touchstone graduated from the University of Central Florida in 1998, with a Bachelors Degree in Electrical Engineering.  In 2000, he began working for Lockheed Martin Corporation at Goddard Space Flight Center as a Satellite Systems Engineer, and is currently a Sr. Software Systems Engineer at Lockheed Martin’s Lake Underhill Facility. Jon accepted Jesus Christ as his personal Lord and Savior while sitting with a friend in a pizza shop near Emory Law School, Georgia, in 1983, and his life has never been the same. Shortly after this, he participated in a year-long outreach program with a former ministry, and in 1989 graduated from a four-year Christian Leadership Program.

Jon and his family currently live in Oviedo, FL, where they run a wonderful household fellowship. He is also an ordained minister for The Living Truth Fellowship Ministry, and has been serving on the Board of Trustees since 2015. He greatly loves God and His Son, Jesus Christ, and looks forward to contributing to the movement of God’s Word throughout the world. In addition to his family, he loves drawing, painting, writing, history, and hunting. 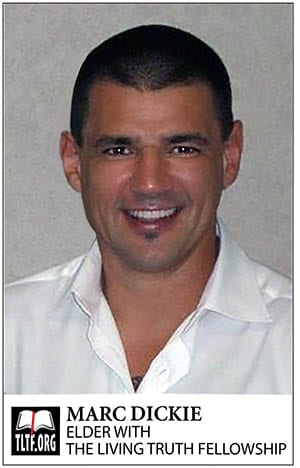 Marc Dickie jokes that he was born an Englishman but is now a born-again American. He came to the United States from London when he was 16 and got seriously involved with Christianity. Although he had been confirmed in the Church of England and studied with non-denominational churches in the United States, Marc did not find what he was looking for until he searched outside orthodox Christian circles. What he was being taught about Jesus and his Father did not line up with what he was reading in the Bible, or with what he was experiencing in his church. It just wasn’t making sense.

After several years of searching and studying with different ministries, he came across The Living Truth Fellowship. The teachings he found helped him correct much of what he had previously been taught. He describes it as looking at Jesus through a telescope that was out of focus, but is now crystal clear.

When not on assignment as a traveling RN, Marc, a nurse for 20 years, and his lovely wife Maria live in Orlando FL. They have 4 daughters and 6 grandkids. He says: "Orlando is home, but we are blessed and privileged to be able to travel about the country, ministering to people wherever we find them. It is a great honor to be a TLTF Elder, but an even greater honor to speak truth into people's lives." 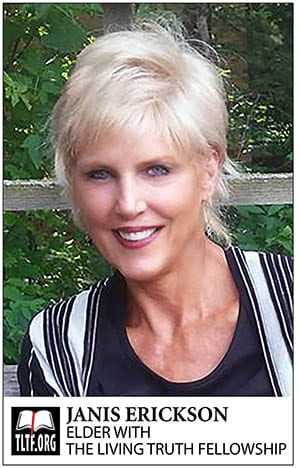 Janis Erickson attended the University of Minnesota and majored in Psychology. She then worked as a Flight Attendant, and later became a Christian Air-way Ambassador. She went on to become a photographer for many years, still a cherished hobby of hers. Janis also headed up the Refuge Ministry for battered women, and spoke in front of Congress on their behalf. She also belongs to The Deborah Company, an organization devoted to praying God’s Word over personal circumstances in which people need deliverance. Janis is an ordained TLTF minister and does personal counseling. She enjoys boating, motorcycle riding, traveling, the arts, reading, and music. 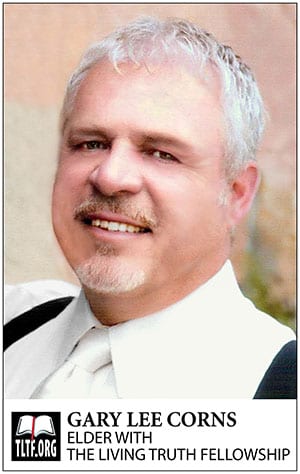 Gary Lee Corns is a land manager for Blackhawk Mining in West Virginia, and has been in the mining industry for more than 28 years. He and his wife Wendy have been married for 23 years, and have four children and four grandchildren. They are both real estate investors and own and manage residential and commercial property. Gary Lee is an ordained minister and has served the Body of Christ for the past 33 years. He currently serves as an Elder with The Living Truth Fellowship, and also teaches and conducts fellowships in his local community. His passions are prayer, teamwork, and learning. He loves quiet time with the Lord above everything, and is an avid reader. His hobbies are fishing, cooking, golf, poker, and pool. 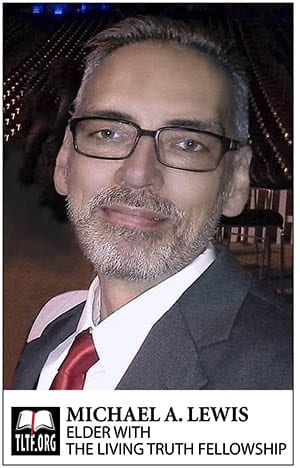 Michael A. Lewis: Having been raised in the mountains of West Virginia, Michael moved to Texas as soon as he could. There he met Dana, now his wife of 33 years. They have five children and five grandchildren. He spent 18 years in the restaurant industry before changing to the construction business, in which he is a Journey Wireman and an IBEW Instructor in the Joint Apprenticeship Training Program. Michael is currently serving as an Elder with The Living Truth Fellowship and hosts an online fellowship every week. He is quoted as saying, “While I have always been apt to teach, my real passion is going to the Lord in prayer to perceive how I may better serve his people.” When not working, he enjoys spending time studying the Bible, physics, and history. 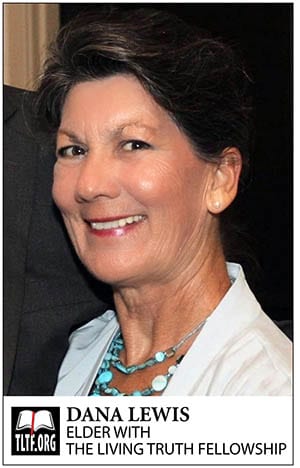 Dana Lewis is an Elder with The Living Truth Fellowship who lives in Houston, Texas. She is married to Michael Lewis, also an Elder and an alternate Trustee. They have five children and five grandchildren. Dana spent 40 years as a working homemaker and is currently semi-retired. She enjoys Bible study, gymnastics, pottery, water skiing, and traveling. From a small child up to adulthood she attended the Episcopal Church with her parents and two sisters, always having a desire to know God and understand the Bible. In 1984 she took her first Bible study class, and has continued in her dynamic Christian walk for the past 34 years. She has a passion and love for the members of the Body of Christ, and it shows clearly in her beautiful smile and compassion for God's people. 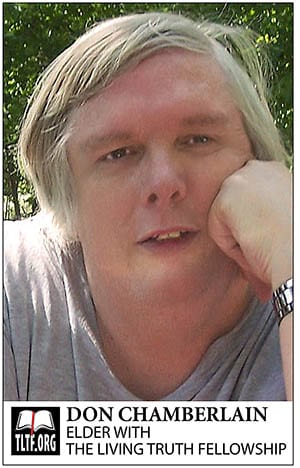 Don Chamberlain was born into an Air Force family in Pasadena, Texas and lived in four different places before he was five years old. Once his father retired after various duty stations, Don's family returned to East Falmouth. Two years later they moved to Ashland, Massachusetts, where he got involved in a Biblical research and teaching ministry.

Don left home for a year of establishing home fellowships in another state. There he met Christine, who a few years later became his wonderful wife. They have three daughters. Don currently lives in Brooklyn, New York. He is an Elder with TLTF and has coordinated the Prayer Team for several years. 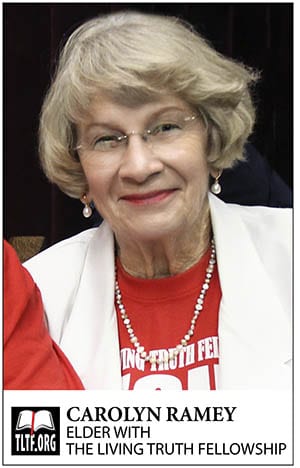 Carolyn Ramey: Born in LaPorte, Indiana, Carolyn has lived most of her life in Michigan. She was the Valedictorian in her high school class, but still had time to fall in love her high school sweetheart, Virgil, to whom she has now been married for 60 years. Carolyn worked for several years as a secretary at the VA Hospital in Ann Arbor, Michigan. In 1961 she gave birth to her first daughter, and then in 1962 a second one. She became a full time housewife until 1965 when she started college. After graduating with honors in 1970, she began teaching high school, and retired from teaching in l996.

Carolyn attended a Protestant church all her life, but in 1973 found a biblical research and teaching ministry that unlocked the Word of God for her and gave her life new meaning and joy. She and Virgil have coordinated many Bible fellowships during their six decades of marriage. They are thankful to serve together as Elders with the The Living Truth Fellowship, and have been truly blessed by endeavoring to live the Word of God each day. 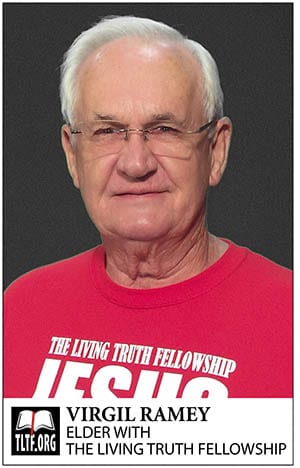 Virgil Ramey was born in northwest Alabama in his grandfather’s farm house. He migrated to Michigan by way of Oregon, and in his Freshman year of high school met the love of his life. He married Carolyn, and they have two daughters and four grandchildren and one great-grandson.

At age 19 Virgil began his 41-year career in property and casualty insurance. He was a multi-lines claims investigator and owner of an Independent Insurance Agency.

In 1972 he was introduced to Christianity in a ministry that did biblical research and teachings, and he became an avid follower of Jesus Christ. Since then, he has been involved with several Christian ministries, and is currently serving the Body of Christ as an Elder with The Living Truth Fellowship.