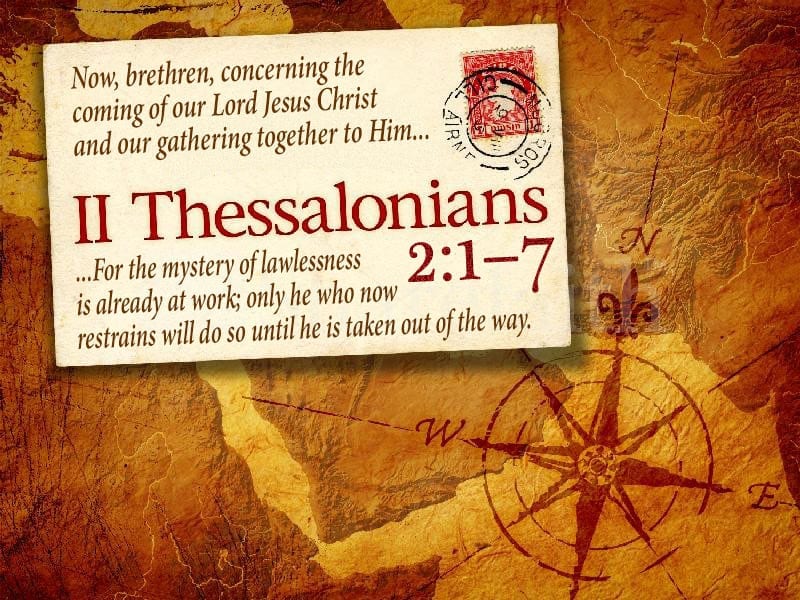 Here we are at the end of another calendar year, and we Christians are still buying time, as it were. The Devil is grinding his teeth at the fact that his one-world government agenda, which includes a major economic reduction here in the USA, has yet to be fully accomplished. Why? Because, as everyone who Got The Chart, Got The Life knows, YOU AND I ARE STILL HERE, STANDING IN THE WAY! We Christians are what is blocking Satan from running roughshod over the poor souls left on earth after the Lord Jesus yanks us out of here in the twinkling of an eye. Where does the Bible say that? Here you go:

2 Thessalonians 2:1–7 (NKJV)1
1 Now, brethren, concerning the coming of our Lord Jesus Christ and our gathering together to Him, we ask you, 2 not to be soon shaken in mind or troubled, either by spirit or by word or by letter, as if from us, as though the day of Christ had come. 3 Let no one deceive you by any means; for that Day will not come unless the fallingaway[apostasia=“departure”] comes first, and the man of sin is revealed, the son of perdition, 4 who opposes and exalts himself above all that is called God or that is worshiped, so that he sits as God in the temple of God, showing himself that he is God. 5 Do you not remember that when I was still with you I told you these things? 6 And now you know what is restraining, that he may be revealed in his own time. 7 For the mystery of lawlessness is already at work; only He [he, the “one new man”] who now restrains will do so until He [he] is taken out of the way.

I expound these verses in depth in The End Times, our fabulous 5-hour video, which, if you have not seen, I encourage you to get. Only those to whom Paul had taught a pre-Tribulation “gathering together” would be “shaken in mind or troubled” by the notion that the day of Christ had already come and they had missed it. The “man of sin” cannot begin to exercise his rule over the world until “he who now restrains” is taken out of the way. WE are the figurative HE, that is, the “one new man” of Ephesians 2:15, the Body of Christ, the Church. Amen.

Jesus Christ went the distance for you and me, all the way through the Cross and the Grave. Will you go the distance for him? Standing for a lifetime requires building your endurance. Despite the distorted and poisonous teaching of some of my former peers (e.g., Vince Finnegan), “enduring” is not about earning your salvation by being faithful to the Lord. Matthew 24:13 (“He who endures to the end shall be saved”) has absolutely nothing to do with Christians, because Jesus knew nothing about Christianity.

If you are familiar with our work, you know that Jesus could not know anything about this “administration of the secret” (Eph. 3:9) or its hallmark: the permanent guarantee of salvation for those who confess him as Lord and believe in his resurrection. Why not? Because had Satan gotten wind of it, he never would have crucified Jesus. So the Secret of the One Body, that Jesus would diversify himself into a worldwide body of believers equipped with his resurrection power, was “hidden in God.” In Matthew 24, Jesus spoke to Israel about the time of tribulation that he knew from the Hebrew Scriptures (Jer. 30:7; Dan. 9:24–27) they were going to endure. What he didn’t know was that it would be about 2000 years later. In that upcoming administration, salvation, as it was prior to Pentecost, will be conditional upon people maintaining their faith, and those who endure to the end will be saved.

No doubt you’ve seen the WWJD? bracelets, jewelry, bumper stickers, T-shirts, etc. As our brother Bob Wassung has pointed out, WWPD? apparel is much more appropriate for Christians to wear. Why? Because, as a Jew, Jesus would have been baptized, tithed, and celebrated the Passover. But after his ascension, the Lord Jesus gave the once-Jewish-Saul, now-Christian-Paul all the revelation found in the Church Epistles (Gal. 1:11 and 12) and it was Paul who set the pattern for how Christians should live.

Based upon the magnificent truth that the Lord Jesus gave him, the apostle Paul became the epitome of endurance. Consider everything he went through for the sake of the Gospel. Did he endure all he did in the hope of finding out at the end of his life that he had been good enough to receive everlasting life? No, he joyfully endured because, like you, he had the absolute guarantee of a new body in Paradise, and he wanted to show his gratitude to the Lord by helping others receive everlasting life and come to a knowledge of the truth.

2 Timothy 2:11–13 (NKJV)
11 This is a faithful saying: For if we died with Him, We shall also live with Him.12 If we endure, We shall also reign with Him. If we deny Him, He also will deny us. 13 If we are faithless, He remains faithful; He cannot deny Himself.

In these often misunderstood verses, Paul tells us (v. 11) that if we “died with Christ” (got saved), we are guaranteed to “live with him” (in Paradise). Verse 12 then speaks of the rewards Jesus will give us if we endure in service to him, but says that if we do not do so (and thereby “deny him”), he will deny us rewards. Verse 13 closes this succinct differentiation between salvation and rewards by stating that even if we do not serve the Lord, we are still part of his Body, and thus guaranteed life in the coming age. Hallelujah!

I recently heard a trenchant analogy shared by John Lennox, an Oxford professor and Christian apologist known for debating and dissecting atheists. No, I wasn’t watching SportsCenter with him, I saw a video in which he was making the point that Christianity is the only faith system that guarantees a person everything up front and then leaves it up to him as to how he will live in response. To show the absurdity of salvation by works, Lennox said, “Suppose after coming home from their honeymoon, a husband presented his new wife with a huge cookbook and told her that, depending on how well she followed its instructions for the next 40-50 years, he might love her by then. Which would motivate her more—saying that, or telling her that she had his undying love even if she burned every meal?” I trust you get the point.

“What time is it?” Or perhaps we should ask, “What is it, time?” It is the entity/realm/continuum in which “life” is presenting itself to you. How are you using it, or is it more often using you? Too often, circumstances—that which is standing all around me and presenting me with many opportunities to sin (Heb. 12:2), dictate what I choose to do with my time, e.g. But no matter what happens around me, I always have the choice as to how I respond to it.

Are you more excited about Jesus Christ than you were a year ago? Five years ago? Ten? Twenty? If not, it is almost certainly because you have made choices that have diluted your fervor. You probably hold more biblical truth than most people who have ever drawn breath, but to what degree does that TRUTH HOLD YOU? Each of us was bought with a price—the life of God’s own Son, and our lives are not our own. That begs the sobering question: How much authority does the Word of God have over you and me? The answer is not subjective: “Now by this we know that we know Him, if we keep His commandments” (1 John 2:3).

When you open the Word, think about the legacy of which you are a part. Think about Paul writing the original copy of Ephesians from a jail cell, and those brethren who received it holding it and reading it for the first time. Think about those who copied it; about those who later translated it into each language, those who first printed it on a printing press, and those who died in flames with Bibles at their feet. Then think about YOU first reading it and understanding it, and sharing its truth with someone else—who believed it!

Jesus said to pray that the Lord of the harvest will send out laborers into the harvest. He is calling for some TIMOTHYS! He is calling all who want to sell out to him like those brethren in Acts and the Epistles. He is calling all those with an unquenchable passion to make known the Good News and set people free. And he is calling those who hear about a 24-hour Bible class and say, “I’ll be there if it is 240 hours! I want TRUTH more than anything.”

Who are you mentoring? Who will take the Word to the next generation, a generation growing up in an increasingly godless world? Young people today are being hammered with countless lies about every aspect of life. “The god of this age” is doing an excellent job of blinding people to the light of the Gospel, even many who sit in a church each Sunday. What can you and I do about it? At least we can tell the old, old story of Jesus and his love—and we can show people his love in action.

1 Corinthians 1:10
I appeal to you, brothers and sisters, in the name of our Lord Jesus Christ, that all of you agree with one another in what you say and that there be no divisions among you, but that you be perfectly united in mind and thought.

That describes the kind of spiritual camaraderie we in TLTF are striving for among those who choose to be a part of this ministry community. One Day With The Creator is the primary means by which we can become likeminded about the Word of God. Then we can have the joy of getting to know one another as friends and appreciating the unique and awesome qualities and abilities that each child of God has. If you are not part of a local fellowship, see what you can do to connect with saints standing on Truth. And of course you are always welcome at one of our online fellowships.

This Christmas season, give the gift of Truth to those on your list—the Truth about Jesus Christ—why he was born, why he had to live a sinless life, why he died and rose from the dead, and why he is coming back to give us everlasting life in Paradise. Have the MERRIEST CHRIST-centered holiday ever. See you in 2014!