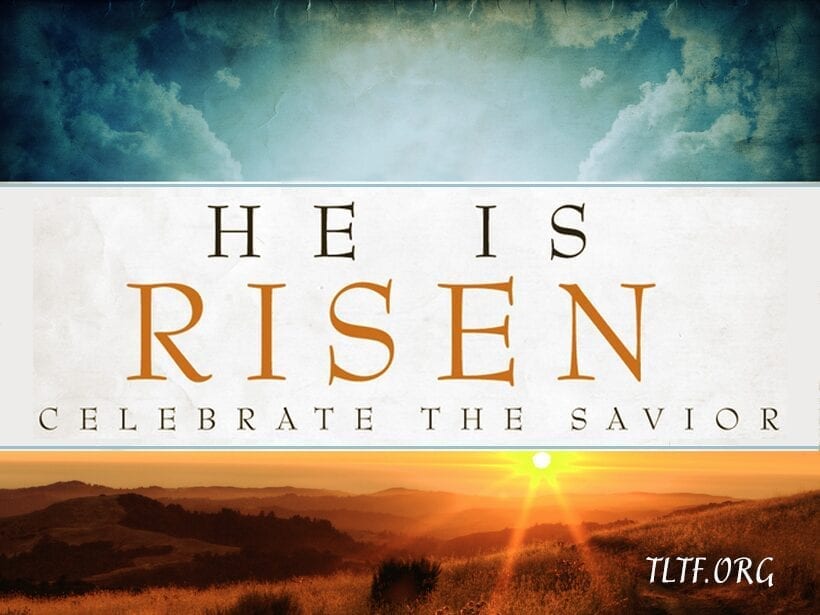 Please bear with me while I momentarily wax nostalgic. Today, April Fool’s Day, marks 30 years since three officials from the worldwide Christian ministry in which I had served as one of the “Top Ten” people for nearly 20 years came to my door in McLean VA and fired me. When I pressed them for a single reason, they could give me none. My father could never get over the irony of my being fired on April Fool’s Day, and my line was—and still is: “Thank God they didn’t come back and say, ‘April Fool,’” for in retrospect I was set free from an increasingly godless, authoritarian, and stifling hierarchy riddled with far more doctrinal error than I realized at the time. Perhaps you are one of the many who has accompanied me on all or part of my journey since then, and if so, God bless you. What a ride! And it’s not over.

I guess I would say that my primary mission since that fateful day has been to introduce people to the Lord Jesus Christ at a deeper level than we knew him “Way back when,” and encourage them to pursue an intimate relationship with him. Certainly he can, and will, work in those who do, as I hope you know experientially. In fact, our Lord longs for intimacy with each of his followers.

This month we Christians joyously celebrate the glorious event that once-and-for-all guaranteed the fulfillment of God’s dream of a perfect race on a perfect earth, which the First Adam had shattered by his wanton disobedience of God’s Word. What was that earth-shaking event? The RESURRECTION OF JESUS CHRIST. Think about it—an absolutely dead human being was given new, and everlasting life. Just as Jesus will now be Jesus forever, so you will be you forever, but with a vibrant new body.

In keeping with his purely hateful and lying nature, the Devil does all he can to obscure and distort God’s glorious Truth. That is why most people call the day of our celebration, “Easter.” It’s bad enough that a giant, and sometimes cerulean (ok, that means “sky blue”), rabbit relentlessly leaves a trail of stolenchicken eggs, but worse, “Easter” actually comes from the name of the goddess Astarte, whose resume is wanting, to say the least. Wikipedia: “The deity takes on many names and forms among different cultures, and according to Canaanite mythology, is one and the same as the Assyro-Babylonian goddess Ištar, taken from the 3rd-4th century Sumerian goddess Inanna, the first primordial goddess of the planet Venus.” This mythological mama was also known as the patron saint of prostitutes, both heterosexual and homosexual. Nice gal.

Nothing ruins your life like death. Why? Because in any language on earth, “death” means “the end of life.” But most all Christians have had drummed into their heads something akin to the following perversion of God’s truth: “Christians are spirit beings who possess a soul and live in a body.” And of course that “soul” (or maybe it’s the “spirit,” we’re not sure which) is immortal, so that at the glorious moment when its “fleshly prison” is mowed down by a runaway garbage truck, the soul gleefully wings its way into the presence of God, Jesus, and all the others who have one way or another kicked the proverbial bucket.

Since last Resurrection Day, death struck very close to home for Elizabeth and me when she lost her dear mother several months ago. I daresay the same may well be true for you. Like I, you have probably lost loved ones whom this mortal enemy has snatched irreparably from your life. And it hurts!

A few years ago I was privileged to do the memorial service for a longtime believer whom I loved dearly. Afterward, one of the attendees said to me, “John, you really make death live!” I took that as a compliment. Why? Because if one does not fully grasp the horror of death, he will not fully appreciate the antithetical glory of resurrection!

Surely you have heard the poignant exhortation, “It’s a matter of life or death!” Isn’t that to emphasize the stark contrast between the two, as well as the urgency to act in such a way so as to preserve life? But is that what most Christians are taught? No. Famous Christian personalities, mega-church leaders, and TV preachers pound their people with Satan’s first recorded lie: “You shall not surely die.” They teach that only one’s body dies, but his “soul” (or his “spirit”—who knows?) lives on, winging its way into the presence of Jesus—and the guy’s former golfing buddies who have already gone on to that great fairway in the sky (well, at least those who could keep the ball in the fairway).

One well-known TV preacher called the death of his friend a “graduation.” But how many congratulatory cards do you think the widow received? Why would people carry on as they do when a loved one dies if he or she is now with Jesus? How selfish of them! Follow the logic, and you can see how the lie that there is really no such thing as death begets not only other lies but also extensive emotional conflicts. People are angry at God for taking their child, or they feel guilty for wanting the child back from “heaven” and with them.

Perhaps we should ask how Jesus viewed death as he came to its precipice in Gethsemane. Was he cavalier about it, like Socrates before he chugged the poison hemlock? Not quite. The Son of God “sweat bullets,” as it were, as he prepared his heart to trust His Father’s promise to raise him from the abyss of death. Why? Because he knew that words have meanings, and that in Hebrew, Greek, English, Sanskrit, and Pig Latin, “death” means the absolute“end of life.”

Given that Jesus had perfectly internalized the written Word of God, he, like His Father, abhorred death. That’s why he wept when his friend, Lazarus, died. How pumped was Jesus a few days later when he stood before his grave and boldly declared, “Lazarus, come forth!” As you may know, that was, both for him and for us, a preview of coming attractions.

After his Resurrection and Ascension, our Lord gave the apostle Paul the revelation we know as the Church Epistles. 1 Corinthians 15:26 states that death is an ENEMY, not a friend that introduces you to Jesus and re-unites you with your beloved kindergarten teacher. In truth, death is the ultimate enemy of mankind. For those who do not embrace Jesus as Lord, it is the DEAD END on the road of life. Both God and Christ agree with what our popular eye-catching bumper sticker which says: DEATH SUCKS.

Do you realize that our Hope is also Jesus’ hope? How much do you think Jesus misses the apostle Paul and longs to see him again? How badly do you think he wants to meet David for the first time? And to THANK the countless Christians (most of them nameless in the annals of history) who lived their lives for him, some to the point of martyrdom? The Lord has to be pacing the floor up there and asking God, “Is it time to go to Church yet?”

For a much more thorough exposition of this critical, “life-and-death” issue, see Segments #25 & 26 of One Day With The Creator and our book Is There Death After Life?

After brilliantly defining “faith,” Hebrews 11 chronicles the names and deeds of now-dead “Old Testament” heroes who by faith “conquered kingdoms, administered justice, and gained what was promised; who shut the mouths of lions, quenched the fury of the flames, and escaped the edge of the sword; whose weakness was turned to strength; and who became powerful in battle and routed foreign armies.” As we point out in Jesus Christ, The Diameter of the Ages, Jesus devoured these written records, and they helped shape his own faith to the degree that he willingly stepped into the abyss of death, trusting His Father’s written promise to raise him to everlasting glory. He saw his destiny to live for something beyond himself, and we can follow in his steps.

Hebrews 12:1-2
Therefore, since we are surrounded by such a great cloud of witnesses, let us throw off everything that hinders and the sin that so easily entangles. And let us run with perseverance the race marked out for us, fixing our eyes on Jesus, the pioneer and perfecter of faith. For the joy set before him he endured the cross, scorning its shame, and sat down at the right hand of the throne of God.

Trinitarians say that Jesus was able to do all he did because he was the “God-man.” In contrast to that pagan fallacy, Scripture tells us that, as a human being, our Savior had to trust the written Word of His Father, with which he filled his heart and mind, and from which he never wavered in his obedience. Jesus perfectly demonstrated for us “the art of faith (trust),” all the way to the Cross. Because he did, he now dwells within you and me via his gift of holy spirit, the divine nature he inherited from his Father and passed on to us (Acts 2:32-33).

And now our Lord is excited about making himself known far and wide via the members of his Body—like you and me. He has given us the same power that raised him from the dead so that we can think, speak, and do like he did, to the end that we re-present him to a dying world. Given how much God and Christ have invested in you and me, what do you think they will do to help us live for them? Romans 8:32 comes to mind: “He who did not spare his own Son, but gave him up for us all—how will he not also, along with him, graciously give us all things?” Our Father’s hand of provision is constantly extended to us, so let us boldly take hold of what He longs to give us day by day.

Speaking of milestones, this month also marks three years since I was diagnosed with Stage 4 bone marrow lymphoma and sent out an urgent prayer request to all those on our mailing list. If you have prayed for me, THANK YOU! Please keep it up, as my 3/9 blood draw showed the lowest hemoglobin and platelet numbers yet, so I had another transfusion on 3/14. We had a long talk with our Naturopath, and she gave me several new supplements that I am now ingesting. Our Lord Jesus shed his precious blood so that he could now make me whole, which I expect any minute.

Here are some verses to which I hold fast: “Blessed are those who have regard for the weak; YAHWEH delivers them in times of trouble. YAHWEH protects and preserves them—they are counted among the blessed in the land—he does not give them over to the desire of their foes. YAHWEH sustains them on their sickbed and restores them from their bed of illness (Ps. 41:1-3). He has miraculously sustained me, as I have pretty much been able to do everything except the “Traveling Salvation Show,” and He will restore me. So be it. Hope to see you soon!