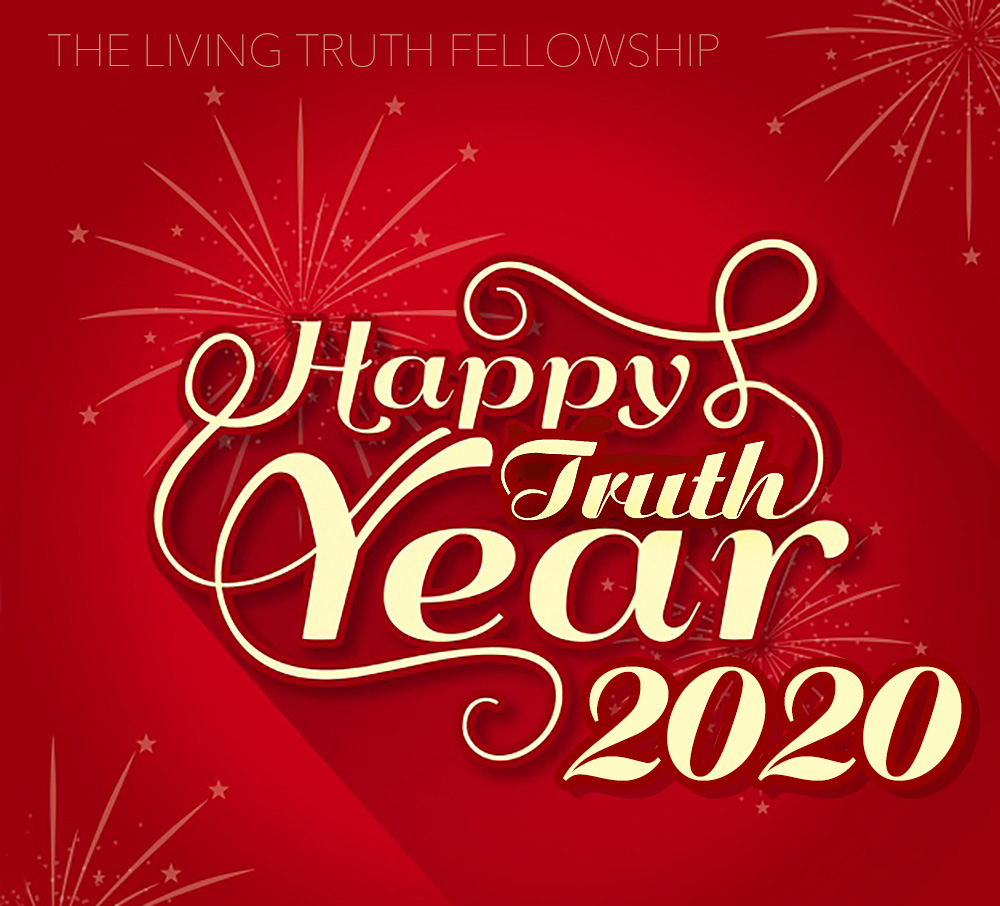 Perhaps you recognize this popular 1972 song, the chorus goes: “I can see clearly now, the rain is gone. I can see all obstacles in my way. Gone are the dark clouds that had me blind. It’s gonna be a bright, bright sunshiny day.” And we can say, “a bright, bright sunshiny year.” That is because, as per Nehemiah 8:8 and 12, 20/20 biblical vision is the root of our joy each day, no matter the circumstances. To know that you are God’s beloved child, and to understand who you are in Christ, the reality of his constant presence, and the abiding hope of everlasting life in Paradise are treasures that cannot be taken from you, no matter how much “identity theft” is going on in the world.

Such cheery musical optimism does not mean that 2020 will be nothing but “a bowl of cherries,” “a piece of cake,” or some other vacuous culinary promise of a life without problems. As I think you know, that is not what God promises us. But what He does promise is that He and our Lord Jesus will walk with us through this coming year and do exceeding abundantly above all we can ask or think. Of course, that might include the Lord gathering us together into the heaven of heavens. How exciting to live with both the expectation of His daily care and of His ultimately rescuing us!

The beginning of a new year is a good time to pause and assess our spiritual growth and the status of our lives as ambassadors for Christ, and I am feeling particularly pensive at this juncture of my life. It has now been almost six years that I have been fighting bone marrow cancer, which has greatly depleted my energy and cut down the amount of work I can do. Only God knows the degree to which your prayers have kept me alive. I know you have your own challenges, be they physical, emotional, marital, parental, financial…whatever. And given that many on our mailing list are getting up in age like I, I hope that what I share will encourage you in some way.

As I look back on my life, I have many regrets about sinful choices and missed opportunities, and it grieves me to think how much more God has wanted to do for me than my faith and obedience have allowed Him to do. But when I am tempted to spiral into despair, I remind myself of His abundant grace and mercy, and the joyous privilege of understanding His Word, and I thank Him profusely. At the bottom line, I am, like you, justified in God’s sight, and we can peacefully rest in His grace and Fatherly adoration.

Romans 5:1-5
1 Therefore, since we have been justified through faith, we have peace with God through our Lord Jesus Christ, 2 through whom we have gained access by faith into this grace in which we now stand. And we[boast in the hope of the glory of God. 3 Not only so, but we also glory in our sufferings, because we know that suffering produces perseverance; 4 perseverance, character; and character, hope.5 And hope does not put us to shame, because God’s love has been poured out into our hearts through the holy spirit, which has been given to us.

The Greek word for our English “perseverance” (literally, going through severity) is hupomone, which means ”steadfastness, constancy, endurance;.” In the NT, it is “the characteristic of a man who is not swerved from his deliberate purpose and his loyalty to faith and piety by even the greatest trials and sufferings.” Literally, it means to stay put even if everyone else leaves. As we know, suffering, in and of itself, does not automatically produce anything good, but suffering met with trust in God does produce greater godly character. In essence, being a Christian is about overcoming obstacles one by one in order to fulfil God’s purposes for our individual lives as ministers of His love.

It has been said that, “Christianity is a team sport,” and the Word makes it clear that intimately interacting with other brethren who are on the same “mission from God” is indispensable for our spiritual, mental, and emotional health.

In this confusing age of broken families, distracted or absent parents, divisive cultural philosophies, an opioid epidemic, mass shootings, an unparalleled number of suicides, and dire global-warming predictions, just to name a few, we each have a golden opportunity to share the simple truth of JESUS and his love, especially with young people. Because you can accurately share God’s Word, you can change someone’s life forever. A recent Colson Report stated:

So, whatever is causing Americans to die younger and younger has nothing to do with medical science or technology. As a recent Washington Post article describes, the causes behind this dramatic shift are things like “suicide, drug overdoses, liver disease and dozens of other causes.” These causes are summed up in the phrase “deaths from despair,” coined by [two] researchers. In other words, we are facing an epidemic of young people who are giving up on life, sometimes before it really even starts for them. As a public health expert told the Post, “People are feeling worse about themselves and their futures, and that’s leading them to do things that are self-destructive and not promoting health.” As the study shows, they’re giving up at a younger and younger age.

The same hopelessness leading to the uptick in “deaths from despair” is also driving what I will call “acts of desperation” that we also see in our culture. In this category, I’d put acts of mass violence, abuse, and the increasing numbers of young people willing to self-mutilate in a pursuit of their identities.

Matthew 9:36 says, “When [Jesus] saw the crowds, he had compassion for them, because they were harassed and helpless, like sheep without a shepherd.” The Greek word that is here translated “had compassion” describes a visceral reaction, not a mere sentiment. In other words, Jesus felt this one in His gut. His response to their plight was to tell his disciples to “pray earnestly to the Lord of the harvest to send out laborers into his harvest,” starting with themselves. Our current epidemic of dying young should elicit a similar response from us.

I am expecting not only to live through 2020—and beyond, but also to manifest the complete healing Jesus bought for me. In any case, I want to take to heart Paul ‘s still-most-pertinent exhortation to Timothy, and, despite my many failures, be able to echo his declaration about his own life, as follows:

2 Timothy 4:1-8
1 In the presence of God and of Christ Jesus, who will judge the living and the dead, and in view of his appearing and his kingdom, I give you this charge:2 Preach the word; be prepared in season and out of season; correct, rebuke and encourage—with great patience and careful instruction. 3 For the time will come when people will not put up with sound doctrine. Instead, to suit their own desires, they will gather around them a great number of teachers to say what their itching ears want to hear. 4 They will turn their ears away from the truth and turn aside to myths. 5 But you, keep your head in all situations, endure hardship, do the work of an evangelist, discharge all the duties of your ministry. 6 For I am already being poured out like a drink offering, and the time for my departure is near. 7 I have fought the good fight, I have finished the race, I have kept the faith. 8 Now there is in store for me the crown of righteousness, which the Lord, the righteous Judge, will award to me on that day—and not only to me, but also to all who have longed for his appearing.

Simply put, Christianity is a matter of our responding to what Jesus Christ has done for us. The more we grasp the magnitude of his accomplishments on our behalf, the greater our commitment to now stand in his stead and show people his goodness. Surely God already has in mind wonderful things He wants to do for you and me in 2020. Let us resolve to hold fast to Him and thus receive all that He longs to give us.

Have a BLESSED New Year!