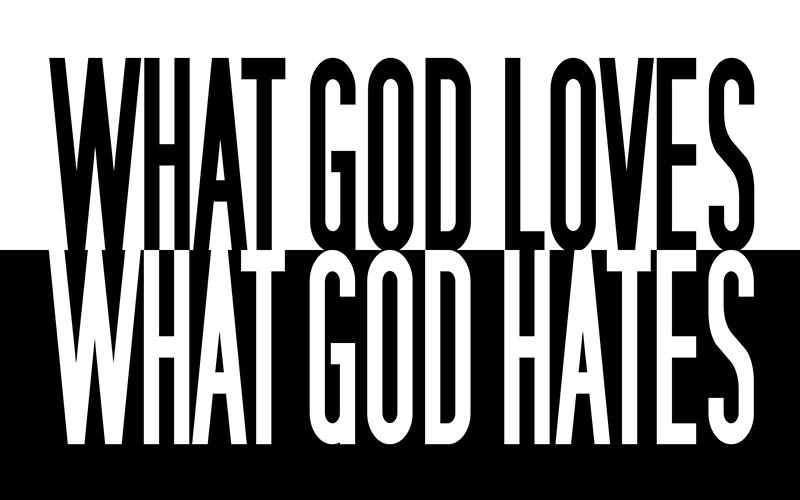 Dear Lover of God and Christ,

Other than hating your team’s Super Bowl opponent, February is all about LOVE. The Gift Card, Candy and Floral Lobbyists make sure that Valentine’s Day is the highlight of this month. Beside loving one’s spouse, fiancée, etc., February 14 can also be a reminder to us about the relentless love of God as expressed in Jesus Christ, as well as how much we love him because he first loved us.

It is no secret that the current assault on freedom of speech is Adversarily aimed at Christianity and those of us who practice it. In that vein, I highly recommend the movie, No Safe Spaces, produced by Dennis Prager and Adam Carolla, which came out the end of October.

Christians are also regularly (and ironically) regarded as haters. Apparently, our modern world regards the act of telling people they’re wrong as a form of hatred. It is never explained how the charge does not apply equally in the other direction, since those who make this charge are telling Christians they are wrong.

In his recently released book titled Christianity at the Crossroads: How the Second Century Shaped the Future of the Church, Kruger makes three trenchant observations about the early Christians and what we can learn from them:

Why were Christians viewed this way? Because of their refusal to worship the Roman gods. Christians were insistent that only [God and Christ were] worthy of worship. And to not worship the Roman gods was to run the risk of invoking their displeasure. So, Christians were viewed as reckless and callous to the welfare of their fellow man. They were called “haters of humanity” (Tacitus, Annals 15.44). Put bluntly, it was the exclusivity of Christianity that made it so offensive. The same is true today.

So dominant was the Christian commitment to their “books” that even the critics took notice. Indeed, this is the reason that Christianity was often regarded more as a philosophy than a religion. In the ancient world, religions were not typically associated with written texts so directly. So, Christianity stood out in this regard (along with Judaism).  While some in the modern day will insist that Christians did not use or need the Scriptures in the earliest stages, the historical data says otherwise. Indeed, this “bookish” aspect of Christianity has been lost in some circles today. And this is one of the core elements that we need to recover. [Ya think?]

While prior generations of Christians might have enjoyed a time when the modern church was a lot like the [pretty much socially acceptable] church of the fourth and fifth centuries, the current generation of the church finds itself in a situation that looks a lot more like the second. Thus, in order to engage with our modern world, perhaps we don’t need a new apologetic but an old one. A second-century one.

What we (and the world) definitely need is accurate exposition of Scripture so that people can make informed decisions as to whether they want to believe what the Word of God actually says. With regard to the so-called “exclusivity” of Christians, the truth is that, as per 1 Timothy 2:4, God is totally inclusive. He “will have all men to be saved, and to come unto the knowledge of the truth.” Jesus laid down his life for everyone, and it is those who choose to reject him who exclude themselves from his saving grace. Yep, it’s the old FREE WILL thing. Consider the following biblical examples about God’s desire for people to choose His ways:

(Mark 8:34-35) And when he had called the people unto him with his disciples also, he said unto them, Whosoever will come after me, let him deny himself, and take up his cross, and follow me. For whosoever will save his life shall lose it; but whosoever shall lose his life for my sake and the gospel’s, the same shall save it.

(John 3:16) For God so loved the world, that he gave his only begotten Son, that whosoever believes in him should not perish, but have everlasting life.

(Acts 2:21) And it shall come to pass, that whosoever shall call on the name of the Lord shall be saved.

Because the word “hate” is thrown around so much today regarding Christians, we had best define it. According to one dictionary, “hate” means: “to feel extreme aversion [i.e., turning away] for or extreme hostility toward; to detest.” So, the basic issue is WHAT, or WHOM should we find detestable, and by what standard are we to determine that? Let’s look at a few Scriptures about “hate,” and what God hates.

Psalm 97:10
Let those who love the LORD hate evil, for he guards the lives of his faithful ones and delivers them from the hand of the wicked.

2 Chronicles 19:2
Jehu the seer, the son of Hanani, went out to meet him and said to the king, “Should you help the wicked and love those who hate the LORD? Because of this, the wrath of the LORD is on you.”

Proverbs 6:16-19
There are six things the LORD hates, seven that are detestable to him: haughty eyes, a lying tongue, hands that shed innocent blood, a heart that devises wicked schemes, feet that are quick to rush into evil, a false witness who pours out lies and a person who stirs up conflict in the community.

Proverbs 8:13
To fear the LORD is to hate evil; I hate pride and arrogance, evil behavior and perverse speech.

Amos 5:21
I hate, I despise your religious festivals; your assemblies are a stench to me.

It’s pretty easy for us to hate bad things we see in others, especially if their antipathy is directed at us. But what about hating “the sin that dwells in ourselves”? As per the following verses, we need a healthy hatred for the subtleties of sin we find within ourselves—if we are willing to have God show them to us.

Psalm 139:21-24
Do I not hate those who hate you, Lord, and abhor those who are in rebellion against you? I have nothing but hatred for them; I count them my enemies. Search me, God, and know my heart; test me and know my anxious thoughts. See if there is any offensive way in me, and lead me in the way everlasting.

Our dear Lord Jesus knows what it is to be hated without a cause, and he promises to stand with us when we as his followers are likewise despised.

John 15:18
If the world hates you, keep in mind that it hated me first.

Luke 6:22
Blessed are you when people hate you, when they exclude you and insult you and reject your name as evil, because of the Son of Man.

Because there is a Devil—D (source of) evil—who is pure hatred, and who unduly influences many people to walk in his perverted ways, we members of the Body of Christ who obey our Lord’s guidance will polarize those with whom we interact.

2 Corinthians 2:14-17
But thanks be to God, who always leads us as captives in Christ’s triumphal procession and uses us to spread the aroma of the knowledge of him everywhere. For we are to God the pleasing aroma of Christ among those who are being saved and those who are perishing. To the one we are an aroma that brings death; to the other, an aroma that brings life. And who is equal to such a task? Unlike so many, we do not peddle the word of God for profit. On the contrary, in Christ we speak before God with sincerity, as those sent from God.

Thus, we can conclude:

Let’s allow the Word of God to calibrate our “love and hate meters.” May our 2020 “worldview” be in perfect sync with God’s and Christ’s, may we see people through their eyes and extend to them love and grace.