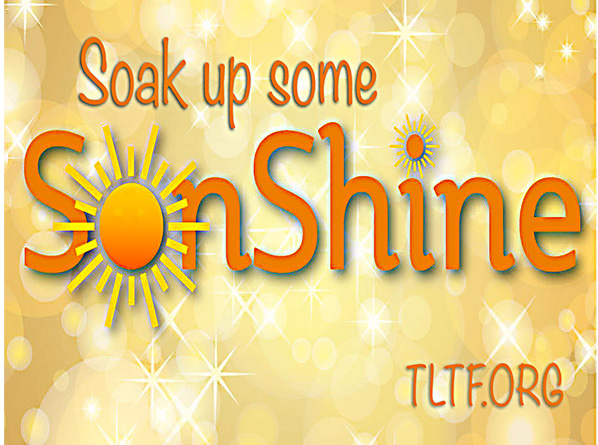 This month brings us the Summer Solstice, when, on June 21, the sun reaches its northernmost point on the celestial sphere, and we enjoy the greatest amount of daylight all year. You could say that it’s the “longest day” of the year, so you can take your time then. Historically, some pagan cultures who worship the Sun have celebrated this annual event with various rituals.

As we teach in both One Day with the Creator and Jesus Christ, The Diameter of the Ages, Psalm 19:1-6 tells us that in God’s celestial message, Jesus Christ, His S-O-N, is represented by His S-U-N. This gives us English speaking folks a wonderful homonym with which we can go wild in drawing many parallels between the two, the chief one being that how one relates to both the SUN and the SON is a matter of life and death.

I love to sit outside on a sunny day and soak up “bennies,” as we in college called the beneficial rays of the Sun. And now: Free Vitamin D, no COVID for me! I regret that it took me about 20 years of Sun “worship” before I came to worship the SON. Now I always think of my dear Lord whenever I see sunshine. And if you want to glow in the darkness like a solar powered light, you need to soak up enough Sonshine.

The contrast between light and darkness mirrors the antithesis between God and satan, Truth and lies, Life and death. No doubt you have heard the saying, “The darker it is, the brighter a light shines.” Actually, in and of itself, a light is no brighter at night than it is in daylight, but it stands out because of the darkness it pierces—and it is much more visible and noticeable.

During the first five months of this year, the state of our nation has disintegrated at an alarming rate, to say the least. Talk about insanity, here’s a verse that nails it: “Woe to those who call evil good and good evil, who put darkness for light and light for darkness, who put bitter for sweet  and sweet for bitter (Isa. 5:20). All we who embrace a biblical perspective clearly see the assault on our citizens—spiritually, emotionally, physically, and economically. Millions of precious people are deceived, depressed, diseased, destitute—and down in the dumps. I think that makes them potential “customers” for the truth of God’s Word. He just needs some fired-up “sales” people, a la Matthew 9:37.

God’s original intention for civil government (Gen. 9:5-6, et al) was what King David, a man after God’s heart, described in the following verses:

The God of Israel spoke, the Rock of Israel said to me: “When one rules over people in righteousness,  when he rules in the fear of God, he is like the light of morning at sunrise  on a cloudless morning, like the brightness after rain  that brings grass from the earth.”

It’s too bad that virtually every government in history has been astonishingly UN-civil. Scripture makes it clear that such oppression is ultimately aimed at eradicating God’s Truth and His people. Here’s a pertinent quote from a recent Colson Report that addresses this matter:

Religious liberty is properly understood as the first freedom, not as a mere side effect of other freedoms. It guarantees other proper rights of citizens, religious or not, because it is based upon a particular vision of the kind of creatures we citizens are. In particular, that we do not belong—either in mind or body—to the state or to a particular interest group. We belong, in our consciences, to God. Any other basis of freedom subjects all freedoms to death by a thousand qualifications.

In the face of the current bare-knuckled cultural barrage, not only upon us here in the USA, but also around the world, way too many Christian assemblies are missing in action, as far as speaking out and pushing back against the increasing tyranny, let alone boldly teaching biblical truth that will set people free from whatever darkness they are in. Let us not be among them, but rather let us take heed to the words of our Lord Jesus, and follow in his footsteps to bring deliverance to those in need.

“The spirit of the Lord is on me, because he has anointed me to proclaim good news to the poor. He has sent me to proclaim freedom for the prisoners and recovery of sight for the blind, to set the oppressed free, to proclaim the year of the Lord’s favor.”

“You are the light of the world. A town built on a hill cannot be hidden. Neither do people light a lamp and put it under a bowl. Instead they put it on its stand, and it gives light to everyone in the house. In the same way, let your light shine before others, that they may see your good deeds and glorify your Father in heaven.”

The following verses are regarding Israel in the future Millennial Kingdom, when they finally carry out the ministry that God originally intended for them (which they trashed) of reconciling the nations to Him, but we can draw a parallel to how things are today, and the role we can play in helping people turn to our God and His Son.

Here’s a similar exhortation to us Christians to get off our derrières and give our all for God before everything goes dark, as it were. That will be when the Lord Jesus shows up to unplug us here on earth and give us a battery that will last forever. Eat your heart out, Mr. Energizer Bunny.

For you were once darkness, but now you are light in the Lord. Walk as children of light (for the fruit of the spirit is in all goodness, righteousness, and truth), finding out what is acceptable to the Lord. And have no fellowship with the unfruitful works of darkness, but rather expose them. For it is shameful even to speak of those things which are done by them in secret. But all things that are exposed are made manifest by the light, for whatever makes manifest is light. Therefore He says: “Awake, you who sleep, arise from the dead, and Christ will give you light.” See then that you walk circumspectly, not as fools but as wise, redeeming the time, because the days are evil.

In closing, I have to unpack a few gems in that passage, just to give you your money’s worth. Vs. 10: Think about how easy it is to love and do things for someone who loves you immensely. You long to do anything you can to bless and please him/her. Consider the incalculable disappointment God has experienced not only from the billions of people who through the centuries have rejected His love, but also in the Old Testament from His own chosen people. Add to that His many born again children who have gone off the rails (my hand is raised), some never to get back on track, so how thrilled do you think God is when any of His kids do anything He desires!

Vs. 14: If you have drifted into a state of spiritual slumber, you can wake up and turn your light back on. Vs. 15: The Greek word for “circumspectly” means “exactly,” “accurately,” like a mountain climber who must precisely find footholds and handholds to ascend to the top. Vs. 16: The Greek word translated ”redeeming” means “to buy out the supply of something before the market opens.” And the word for “time” is kairos, which means a key moment in time, i.e., an “opportunity,” as it is rendered in the NIV. Destiny is when preparation and awareness meet opportunity.

For the past few weeks, I’ve been reading through the Bible while riding the stationary bike at the gym most mornings. I’m now part way through 2 Kings, and what has perhaps struck me the most are the phenomenal exploits God was able to do on behalf of His people when they obeyed Him. We serve the same God, who we can count on to protect us and provide for us amidst even the most dire circumstances. And we can walk hand-in-hand with our Savior, he of the loaves and fishes, who energized our first century brethren to turn the world upside down.

So they called them and commanded them not to speak at all nor teach in the name of Jesus. But Peter and John answered and said to them, “Whether it is right in the sight of God to listen to you more than to God, you judge. For we cannot but speak the things which we have seen and heard”… Now, Lord, look on their threats, and grant to Your servants that with all boldness they may speak Your word, by stretching out your hand to heal, and that signs and wonders may be done through the name of your holy servant Jesus.” And when they had prayed, the place where they were assembled together was shaken; and they were all filled with holy spirit, and they spoke the word of God with boldness.

You and I have that same holy spirit of God, and the same power. Let us have the same boldness.