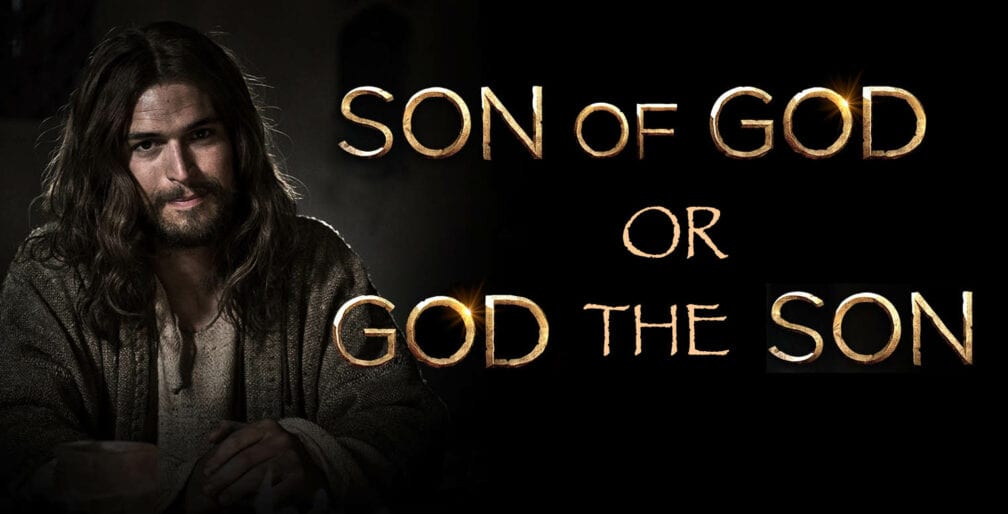 FAQ: Doesn’t the teaching that Jesus is not God, but the Son of God, demean him and make him smaller in people’s eyes?

Good question. The answer is: “No, it makes him look bigger.”

But let’s think about it. First of all, the real issue is not who Jesus is not, but who he is. If I introduce myself to you by saying, “Hi, I’m not Elvis Presley,” you are left with a major question: “Why is he not institutionalized?” No, the question is: “Who are you?” Knowing who someone is not doesn’t tell you who he is, but knowing who he is tells you everyone he is not.

The Word of God makes it clear that Satan’s primary goal is to blind people to the truth about Jesus Christ, because he is the only way to salvation, and because he is the perfect re-presentation of God’s heart for mankind. 2 Corinthians 4:4 says just that: “The god of this age has blinded the minds of unbelievers, so that they cannot see the light of the gospel of the glory of Christ, who is the image of God.”

God is spirit, and Satan doesn’t have to “blind” people to something that is invisible. But he does all he can to blind people to the glorious image of God, Jesus Christ. His chief goal is to stop people from believing in Jesus as Lord and being saved, and to that end he offers a wide variety of lies about Jesus, which millions of well-meaning people have believed.

But Satan obviously cannot turn everyone away from the truth that Jesus is the Savior, and millions of other people do believe and are saved. That in no way dissuades the Enemy from his main goal: distorting as much of the truth about Jesus Christ as he possibly can. The Devil has succeeded in obscuring a key truth about Jesus for most Christians by way of the spurious idea that Jesus is God in human flesh, a God-man who is 100% God and 100% man. At best, this is 200% puzzling. For every answer you could ever want, covering this subject we highly recommend our 700 page book: “One God & One Lord: Reconsidering the Cornerstone of the Christian Faith.”

At least, it negates one’s genuine identification with Jesus as a man who had to trust God and live by faith, just as we are asked to do. Follow my logic now as we think about how both truth and error relate to one’s quality of life, and consider what might be the practical consequences of thinking that Jesus is God in human flesh. If this doctrine is actually from the Enemy, what is his goal in trying to get people to believe it?

At this juncture, John 8:32 is a key verse: “Then you will know the truth, and the truth will make you free.” Ever thought about the converse to that statement? Wouldn’t it be that believing error puts one in bondage to some degree? Absolutely. Suppose you were locked in California, but no one told you that. You could go through your whole life without realizing any practical consequence of this restriction, providing that you never needed to leave California. But what if you got a phone call that your filthy rich aunt in Iowa just died and left you $8 billion, and all you had to do to claim it was go there and sign for it? And that via an eccentric stipulation in her will, if you didn’t, you’d be hung? Bondage!

Spiritually, it is important to note that the importance of the subject in question determines the degree of bondage for the one who is in the dark about it. If you think there were two sheep on Noah’s ark (the Bible says 14, see Segment 7), it will probably not wreck Thursday for you. But if you think that God sends sickness to purify you, and that He also determines the time of your death, you may not make it to Thursday. For further study, read our book: “Don’t Blame God.”

If Jesus were God, what he did would not mean that much, because nothing is hard for God. Neither could he have been tempted in all ways as we are so that we can now relate to him and identify with him in that.

The truth is that Jesus was tempted far beyond what any of us will ever experience, because Satan threw everything he had at the Son of God, who was God’s only hope for man’s redemption. And Jesus responded by “entrusting himself to God” (1 Pet. 2:23), just as he now asks us to do. He really did live by faith, that is, by trusting the promises of His Father. Never did Jesus allow fear to cause him to sin by looking anywhere but God for what he needed. Never did he allow pride to dictate an ungodly response on his part. Never did self-pity distort his perspective of reality to the end that he became depressed under the burden of mankind’s sins. If Jesus is God, we have no real example of faith. For further study, read: “Walking in the Footsteps of Christ.”

By the way, the fact that Jesus (the Last Adam) had no sin nature is not why he did not sin. How do we know that? Because Adam #1 had no sin nature, and he sinned royally. Each had genuine free will, and Jesus did not sin because he chose not to. And when Scripture says that he was tempted in all ways as we are, it means that he felt the same internal pull toward lust, self-defense, self-pity, etc., as we do, but time after time he subjugated it and chose to respond in a godly way.

The idea of the Trinity muddies the waters in regard to many other critical biblical topics, but let us focus on the FAQ at hand. We believe that the doctrine that Jesus is God actually diminishes the magnitude of his heroism on our behalf. For God to do what Jesus did? Obviously it wouldn’t have been hard for Him. And what would we expect God to do but be true to His nature and inherent perfection?

But for a human being to face knucklehead humanity as well as Satan’s subtle ploys umpteen times a day for his whole life and never respond sinfully, and then to endure about 40 hours of indescribable torture (how much pent up demonic fury do you think was unleashed on Jesus from Monday night through Wednesday morning? See our foundational class “One Day With The Creator,” Segment 7, parts 2 and 3) and then hang on the Cross for six hours of excruciating agony while still focusing on Scripture he had to fulfill—and forgiving those who were killing him?? Thank you!!! I love you for that!

Oh, by the way, he said that we human being believers, biblically called his “brothers” (same Father, per Hebrews 2:11), can be and do like he was and did. Think about that, because it is that kind of identification with him that Satan does not want you to have.

If we become like Jesus, do you think we will stand out among other people? Well, did he? What was the testimony of those who encountered him? “We’ve never seen a guy like this.” “We’ve never heard anyone speak like this.” Especially in the gospel of John, the word “glory” is often used in regard to Jesus, and the Greek word is interesting. Bullinger’s Lexicon says it means “not the object itself, but the appearance of the object that attracts attention.” Think about a bowl of apples. Take one and polish it for a minute. Put it back in the bowl. What might someone say when he sees the bowl? “Look at that apple!” Not because it is an apple (that’s no big deal), but because of its appearance compared to the other apples.

Ditto for Jesus. “Look at that man!” Not because he was a man, that was commonplace. But because of how his way of being and his words and deeds stood out compared to those around him. Had he been God, that luster would be greatly diminished, but seeing the truth that he was, and is, the Son of God, The Man among men, we can say with awe, respect, and gratitude, What a man!!! And we can be like him.