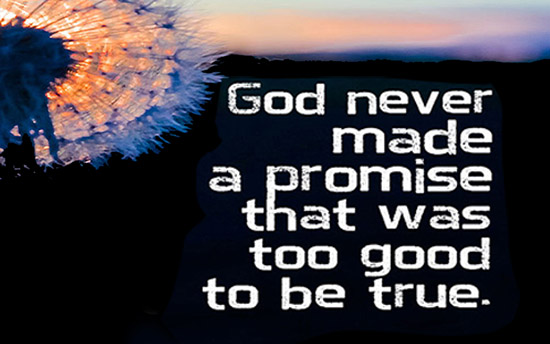 The first Christmas I remember was 1962. I was five years old. I recall rubbing my eyes in wonder and eagerly watching as the gifts were passed around by my two older brothers and sister. To my complete surprise, I got a BB gun; a small, lever-action Daisey BB gun! I was shocked and remember thinking, “Surely Santa made a mistake. I’m not old enough to have a BB gun. Someone has given me Lenny’s gift, or David’s, because this is too good to be true!” But I soon saw that my brothers had gotten BB guns too; so, it had to be mine! Once the reality set in, all the other gifts under the tree became instantly insignificant. No amount of winter sweaters, or board games or bags of marbles could catch or hold my interest, because I had my own BB gun! This was the first time I recall being overwhelmed by goodness, which I did not deserve.

In the late summer of my nineteenth year, my brother Lenny went to a Christian Rock Festival in Ohio. I remember eagerly awaiting his return so I could hear all about it. I can’t quite explain it, but as soon as I saw him, I knew instantly that he was different. He seemed almost to be glowing.  His face was bright, his smile was vibrant and when he saw me he couldn’t hold back the excitement, exclaiming “Bro, Jesus is REAL!  I got born again!”  From that moment on my life was never the same. Throughout the rest of that summer, we attended a home fellowship three times a week where I learned so much about God, Jesus, and the Bible that I had never heard before. The leader of our home group also spoke in tongues, and I wanted to learn about it. He told us we could either take a class where we would learn, or we could read the first five chapters of a book he had and learn from it. Since the class wouldn’t happen until we had enough students, I asked if I could borrow the book. Within days, I found myself home alone and I read those five chapters and at the end I did exactly what the book instructed. I opened my mouth and began to speak the most amazing things I’d ever heard. A language, unlike anything I’d ever thought of began to flow from me!  I began weeping with joy. I had it! I had the spirit of God living in me! I was speaking in tongues, and it wasn’t one or two sounds, it was a language!  In my joy, I ran out of the house looking for the first human I could find to show them what God had done in me!  I literally began knocking on the doors of my childhood friends trying to find anyone to talk to and show them this amazing thing.  I knew that day in 1976, that I would never go back to my old way of life. This was the second time I was overjoyed with goodness which I did not deserve.

I spent the next two years as an in-country missionary, then I attended a four-year leadership training school, followed by two more years as a city coordinator over several home fellowships. I dedicated my life to helping other people know the Bible and that is all I truly wanted to do. Then, on August 8, 1984, I was invited to accept ordination into the ministry. It was the most solemn moment of my life, and I was sure that I did not deserve this kind of recognition. But that night as I stood among a few dozen others who had also been selected and before hundreds of our friends, I surrendered completely to whatever God wanted for me. Then, as the man standing with me began to prophecy over me, something like electricity surged through my body from my feet to my head and it happened three times. I had no expectation that anything like this was going to happen. I assumed ordination was just a ceremonial acknowledgement. But, THIS was no ceremony.  God was doing something inside me and to me. I was instantly overwhelmed by the presence of God and all I could do was weep. More than anything else, I left that night knowing that God had accepted me just as I was. I had never been so amazed by the grace of God as I was that night. It was truly too good to be true.

Today, nearly forty years later, I continue to be amazed by the “too good to be true” grace of God. I’m learning more each day how the acknowledgment of the grace of God brings everything else into proper focus. We are called by grace (Gal. 1:6). We are justified and redeemed by grace (Rom. 3:24). By grace we are made holy and acceptable (Rom. 15:16). Through grace we are filled with all spiritual blessings (Eph. 1:3). Grace worked the miracle of all miracles transforming us from death unto life, making us new creations in Christ, never to return to our old self.  That truly is the gift that is too good to be true.

This Christmas, let’s rest in this knowledge; that God’s grace in Jesus Christ is enough.  We don’t need new toys, new presents or even new revelations.  We need only to recognize and accept that God did it all for us through grace and we didn’t deserve any of it.

Ephesians 2:4-9
But because of his great love for us, God, who is rich in mercy, made us alive with Christ even when we were dead in transgressions—it is by grace you have been saved. And God raised us up with Christ and seated us with him in the heavenly realms in Christ Jesus, in order that in the coming ages he might show the incomparable riches of his grace, expressed in his kindness to us in Christ Jesus. For it is by grace you have been saved, through faith—and this is not from yourselves, it is the gift of God— not by works, so that no one can boast.

Merry Christmas and may we rejoice together in the greatest gift of all, His matchless grace; and in light of THAT … nothing else matters or compares!