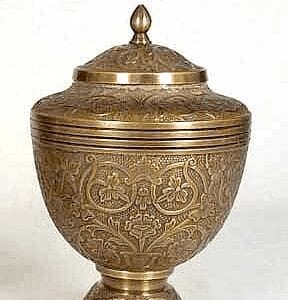 There is no Bible verse that specifically addresses the issue of cremation in terms of whether it is right or wrong for Christians. In fact, God does not give any commandments about what a society is supposed to do with dead bodies. In the biblical culture there were many different ways of dealing with the dead, and God does not specifically and directly encourage or prohibit any of them.

The preferred method of dealing with a dead body in ancient Israel was to bury it, but that was a custom, not a commandment. There were times when bodies were cremated, such as when the people of Jabesh Gilead cremated the body of King Saul, which had been desecrated by the Philistines, and they also burned the bodies of Saul’s sons (1 Sam. 31:12). Also, the bodies of some criminals were cremated, such as egregious sexual offenders (Lev. 20:14, 21:9). Achan and his family, who brought the wrath of God down upon Israel, were cremated by the congregation (Josh. 7:25). Also, as is indicated in Amos 6:10, if there was a siege or plague, the bodies of the dead may have been burned. It is possible in these cremations that the bones were collected and buried, as was the case with Saul (1 Sam. 31:13).

Another practice in Israel and some surrounding countries was to leave the dead bodies of despised individuals on the ground, where they rotted and/or were eaten by birds or wild animals. That is what Goliath threatened to do with David (1 Sam. 17:44), and what David retorted that he would do to Goliath (1 Sam. 17:46). That is how Jehoiakim, an evil king of Judah, was treated (Jer. 22:19). After the future Battle of Armageddon, there will be so many dead bodies that they will be left unburied to be eaten by the birds and animals (Jer. 7:33; Rev. 19:21).

Like the Israelites, the Egyptians usually buried their dead, and even went so far as to elaborately embalm some of them. The Persians sometimes exposed their dead in the open air (which is what some American Indian tribes did). The ancient Greeks practiced burial, but later widely practiced cremation as well. The Romans generally preferred burial, but also used cremation, and, predating the Christian era, there are Roman memorials along the Appian Way (a major Roman road) to people who had been cremated. In Jerusalem during the Roman era, there is some evidence that the bodies of criminals were occasionally thrown into the Valley of Hinnom (in Hebrew: “Gehenna”) just south of Jerusalem and burned.

Considering all the different ways the people of the biblical cultures dealt with their dead, it seems certain that if God had a particular way He wanted us to dispose of the bodies of our loved ones, He would have said so, if not in the Old Testament, certainly in the New, when cremation was much more widely practiced.

Why does it not seem to matter to God what we do with our dead? Although we may never be completely sure, one thing we do know: it places great emphasis on what we do while we are alive. The words of Ecclesiastes might ring in our ears: “Whatever your hand finds to do, do it with all your might, for in the grave, where you are going, there is neither working nor planning nor knowledge nor wisdom” (Eccles. 9:10).

Furthermore, no matter how dead bodies are handled, eventually they go back to “dust.” God said that to Adam some 6,000 years ago, and it is quite true: “…for dust you are and to dust you will return” (Gen. 3:19). The Hebrew word translated “dust” is aphar, which is translated a number of ways in the Old Testament: dry earth, dust, powder, ashes, earth, ground, mortar, rubbish. There are a number of ways this decomposition back to dust can happen. A person could: 1) be buried, and slowly decompose underground; 2) be burned up in a fire, and thus decompose quickly; 3) drown, and eventually decompose under water; 4) die unattended and be eaten by animals and insects. Eventually, no matter how we die or what happens to our bodies afterward, we will end up as “dust.” Apparently from God’s perspective, in terms of how to dispose of a dead body, there is no right or wrong way for that to happen.

Personally, and practically, we think cremation makes sense in many cases. Though most Christians have been taught that death is only “separation from God,” and that a “dead” person is “alive” in some incorporeal form, Scripture says that death is the end of life. Therefore, the person who died cannot know what happens to his body. And those who are responsible for its disposal will save a lot of money by having it cremated rather than spending a fortune for a fancy casket that will be buried and eventually rot away.

Jesus said that knowing the truth will make one free (John 8:31 and 32), the obvious converse to that is believing error puts one in bondage to some degree, whether he knows it or not. The erroneous teaching that only the body of a person dies, while his soul or spirit lives on somewhere, opens up all kinds of problematic ideas for his loved ones who are still alive.

In regard to the subject of this article, survivors may think that their dead relative is able to see how they dispose of his body. They may also think that the dead one now has the power to affect their lives either positively or negatively. Those beliefs may lead them to take on a large amount of debt in order to buy an expensive casket rather than one more reasonably priced, placing a financial burden on the family, which is a very sad situation.

To us the message in the Bible is very comforting, because it means we do not have to be consumed with grief about what has happened to the bodies of those we loved, no matter how or where they may have died. Biblically, there is no “right thing” to do with a dead body, which, from God’s perspective, makes perfect sense. Death was never in the plan of God to begin with, and it is not permanent. Death is an enemy (1 Cor. 15:26), and those who sleep in death will be raised from the dead, no matter how their body retuned to dust, or how long they have been dust.

A point that is worth considering when it comes to the treatment of dead bodies is that after God raises the dead and judge them, each person will have one of two fates: live forever with God in a body that will never die and thus never need to be buried or cremated; or else be thrown into the lake of fire where the person will at some point be completely burned up, cremated by God.

Although there is no correct way to deal with a dead body, there is a right thing to do with your living body: get saved, come unto a knowledge of the truth, and serve God. If you get saved, you can be assured you die, you will be raised to everlasting life in a new body, never to die again. Every that if you do “fall asleep” before Christ comes for the Church, no matter when or how Christian will one day live again when the Lord Jesus comes to raise all dead Christians and take us up to meet him in the air, forever to be with him (1 Thess. 4:16 and 17).