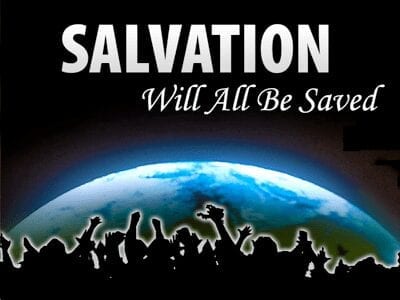 FAQ: I have heard it taught that eventually all people who have ever lived will be saved by God whether or not they believed in Jesus Christ during their lifetimes. Is that true?

The subject is theologically called “Universalism,” that is, that all human beings who have ever lived will eventually be redeemed by God and live forever. At first hearing, that idea goes against the grain of what I think is the clear message of Scripture in regard to the good guys winning and the bad guys losing, but let’s briefly examine some of the arguments for and against this notion, as well as the ramifications of this teaching that definitely seems to blur the distinction between good and evil.

Space prohibits anything more than a glance at some of the origins of this idea, but it is relevant to note that its roots lie in the corresponding untruths that (1) man has an immortal soul and (2) “hell” is a place of fiery eternal torment. Influenced by Plato’s concept of man’s inherent immortality, both Tertullian and Origen, perhaps the two most influential “Church fathers,” were forced to speculate about man’s everlasting destiny. Not seeing the clear biblical truth that fire destroys the wicked, Tertullian said it would torment them forever. Rightly appalled by that hideous notion, but also stuck in the mud of the immortal soul, Origen proposed the idea of “universal restoration,” that the fire would purify and refine the wicked so they would ultimately be restored to unity with God.

Among the basic verses used to substantiate this idea are 1 Timothy 2:3 and 4 (“…God…wants all men to be saved…”) and 2 Peter 3:9 (He does not want anyone to perish), along with Romans 5:18 (“Consequently, just as the result of one trespass was condemnation for all men, so also the result of one act of righteousness was justification that brings life for all men”). Interestingly, 2 Peter 3:9 concludes with the words, “…but everyone to come to repentance,” and Romans 5:17 qualifies the “all men” of verse 18 as “…those who receive God’s abundant provision of grace and of the gift of righteousness….” As in many verses, the “all” in verse 18 means all with distinction rather than all without exception. Clearly, “coming to repentance” and “receiving God’s provision” are choices that men make and those choices determine their destiny.

That brings to mind the fact that there are countless imperative verbs in the Bible, that is, a verb calling for a decision or action on the part of the one to whom it is spoken. Maybe they are called “imperative” verbs because the one who uses them thinks it is imperative, i.e., urgent, that they be obeyed. Scripture makes it plain that the hearer could choose to “Just say no,” as plenty of biblical characters did.

In that light, let’s think about the relationship among the following terms: love, freedom, responsibility, accountability, justice, and judgment. True love requires freedom of will and that is how God sovereignly chose to enter into relationship with mankind. He did not make us robots programmed to do His will, but gave us genuine free will, that is, the ability to choose for ourselves whether to obey or disobey Him. He wanted our love for Him to be real and to come from our hearts in response to His love for us.

Freedom requires responsibility, that is, the ability to act independently and make decisions. To be “responsible” means that you are “liable to be called to account.” So responsibility goes hand-in-hand with accountability, which is to take responsibility for either the benefits or the consequences of your choices. Justice means “fair or appropriate treatment” for one’s choices and actions and, almost by definition, that requires judgment, that is, an appraisal based upon a standard.

If God were in control of everything, as many Christians believe, how could He genuinely reward people for obeying Him? If their choices were actually already determined according to some pre-existing master plan, how could God hold anyone responsible for their actions and either reward or punish them?

Scripture is very clear that a man’s choice of good will bring him rewards and his choice of evil will bring him consequences. “…The wages of sin is death…” and “death,” in any language, means the absence of life. As Jesus’ example shows us, the only “cure” for death is resurrection. Although Revelation 21:8 calls the Lake of Fire “the second death,” and although no verse says anything about a resurrection from that death, and although Malachi 4:1 says that the wicked will be burned up and be no more, Universalism teaches that the Lake of Fire is actually a place of purging and cleansing and that those who are thrown in it will one day come out righteous.

That doesn’t sound like them “receiving” righteousness, as per Romans 5:17, does it? It sounds like they have no choice and, furthermore, that the choices they did make during their lifetimes to be evil and oppose God have no real consequences. Isn’t that a slap in the face of Jesus Christ whose agonizing torture and death—the only way to make available righteousness as a free gift for those who choose it—is thereby rendered meaningless? Why did he go through all that if those who reject him and work for the Devil end up with the same benefits as those who stand for him and even give their lives in the process? It makes no sense, but worse, it flies in the face of the Word of God. Evil is very real and those who exercise their free will to choose it will pay the ultimate price. God cannot lie nor will He be mocked.

Suffice it to say that we think Universalists are engaging in some wishful thinking that doesn’t square with the totality of the biblical evidence. They have elevated God’s “sovereignty” to a place that does not give sufficient weight to the power of human decisions. This is like the classic Calvinist/Armenian debates which are still going on. Some people find it more comforting to believe that God’s will is going to happen regardless of man’s decisions, but we respectfully disagree. We believe that an individual man’s will triumphs over God’s in the decision for eternal life, but God’s will triumphs in the big picture. There will be a Millennial Kingdom and then a Final Paradise, but who will be there is up to the decision of each individual person.