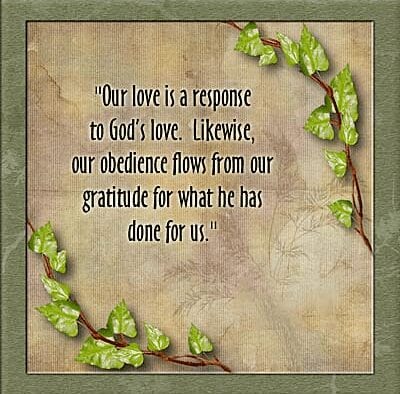 Although Satan is “The god of this age…” (2 Cor. 4:4), he does not have carte blanche to afflict God’s people. The more precisely we as believers obey God the more difficult it is for the Devil to succeed in ruining our lives. Sections of Scripture like Psalm 91 make it plain that the effectiveness of God’s protection of us is in large part proportional to our dwelling “…in the secret place of the Most High…” and abiding in “…the shadow of the Almighty.”

Satan tries to trick us into sinning (disobeying God) and by doing so leaving the umbrella of God’s “protective custody.” For example, when Satan was tempting Jesus in the wilderness, he twisted God’s Word. By misapplying Psalm 91:12, he tried to get Jesus to do something dangerous and foolhardy that would have cost him his life. He wanted Jesus to mistakenly believe that God’s protection of him was absolute when it was actually relative to his faith in and obedience to God’s Word. Nowhere does God guarantee blanket protection to Temple-jumpers.

If Jesus needed to remain in the will of God to assure himself of protection, surely we do too. Sin in the life of a Christian is a primary cause of his vulnerability to spiritual defeat. If Satan can get a believer to act contrary to the will of God, it appears that this gives him an opportunity to step in and afflict him.

Satan carefully chooses his moments to strike, in accord with his goal to confuse people as to the difference between good and evil. He does not take advantage of all sin to correspondingly afflict each person who sins because then he would eventually discourage sin and his success depends upon encouraging it. He does take special pleasure in hurting God’s people in order to make it seem that commitment to God does not result in blessings.

God does not kill people who love Him, or cause them to suffer. It is the Devil who causes death and suffering. God is righteous and just. If a parent, judge, schoolteacher, etc. were to act as God is portrayed by many as acting—punishing one person while letting another go free for the same sin—imagine the din of angry voices shouting “Unfair! Unfair!” And it would be unfair.

It is interesting that most Christians who write about suffering admit that it is unfair, or at least that it seems unfair. But their erroneous belief that God is the cause of the suffering necessitates a distorted rationale. Not wanting to point an accusing finger at God, a finger they would unhesitatingly and rightly point at people, i.e., Stalin, Hitler, Saddam Hussein, Snidely Whiplash, and other perpetrators of heinous crimes, they are forced to say that “unfair” is really “fair” after all.

Philip Yancey’s comment [from his book: Disappointment With God, p. 249] is representative of the confusion that exists concerning God’s fairness:

If, for the sake of a “test” of love, a husband subjected his wife to the trauma that Job had to endure, we would call him pathological and lock him away. If a mother hid herself from her children…we would judge her an unfit mother. How, then, can we understand such behavior…by God Himself? I offer no neat formula…

The Word of God makes it plain that applying such a double standard to Him is unwarranted since He is the epitome of a loving Father.

By doing things like afflicting some people who sin and disregarding others, the Devil has confused multitudes. In Old Testament times, this confusion contributed to what came to be the popular belief that God, if He did not choose to punish someone for his sin, would instead punish the person’s descendants. Job refers to this belief in his great speech in Chapter 21: “It is said, ‘God stores up a man’s punishment for his sons…'” (Job 21:19a). Recognizing that punishing children for a parent’s sin while letting the parent go free is not justice, Job continued, “…Let him [God] repay the man himself, so that he will know it!” (Job 21:19b).

Jeremiah 31:29 and Ezekiel 18:2 also reflect this common belief in biblical times that God punished children for their parents’ sins, as does the verse that we quoted earlier in Chapter 1: “…Rabbi [Jesus], who sinned, this man or his parents, that he was born blind?” (John 9:2). This verse shows that even Jesus’ disciples were confused and were considering the possibility that God did punish children for some ancestor’s sin.

Unless one understands the figure of speech metonymy, it would appear that the Bible does indicate that God punishes children for their parents’ sin. Exodus 20:5 reads, “…I, the LORD your God, am a jealous God, punishing the children for the sin of the fathers [ancestors] to the third and fourth generation of those who hate me.” But this is a great example of the figure prophetic metonymy. God is not actively punishing, instead He is prophetically warning of the consequences of Israel’s disobedience. God does not punish the children of sinners! He even forbids that children be executed for sins they did not commit, as the following verse shows:

It is true that children often do suffer for the sins of their parents, in that, such sins often allow Satan the window of opportunity to afflict them. By their sinful behavior, parents can open the lives of their children to the direct influence of evil spirits that cause confusion, sickness, and even death. Sometimes the “consequences” children receive are very obviously related to the physical sin of their parents. Fetal-alcohol-syndrome and babies addicted to crack-cocaine are both examples of this. It can be documented that abusive tendencies, alcoholism, and other sinful behavior tend to stay in a family for generations. But are these problems acts of God? No! If a mother is a drunk, she is sinning of her own free will. Her fetal-alcohol-syndrome baby is not God’s doing. God is always trying to help and bless people in any way He can.

Again we want to emphasize that suffering or affliction is never, by itself, an accurate gauge of sin in one’s life. The Bible shows that sometimes the righteous suffer while the sinful go free. That is not to imply in any way that there is no value to living a holy life. First, there is a Day of Judgment coming when the Lord Jesus Christ will judge every person according to his or her earthly behavior. Second, and most germane to our thesis, God does work to actively protect those who are trying to serve Him. Throughout the Bible, God is called the believers’ “savior,” “deliverer,” “shield,” “rock,” “fortress,” “stronghold,” “refuge,” “shepherd,” “rearguard,” etc. Although God cannot always totally protect His people from all evil, He is always actively working to deliver us out of all our troubles (Ps. 34:17). No doubt every believer can give examples of God’s helping hand on his or her life.