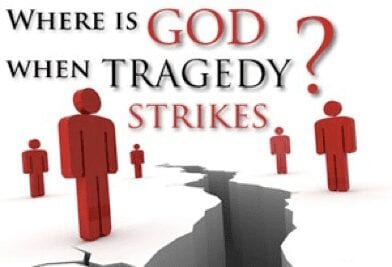 “Why did God allow this to happen?” This is often the question that runs through the minds of family and friends when tragedy occurs. To some, it sounds too hideous to say something like, “God killed your son,” when a child is killed in a car accident. So they euphemistically say that God “allowed” the child to die such a death. But can a logical mind make any distinction between the two? Ours do not and we doubt if yours does either. If God could have stopped it, but instead allowed it, He necessarily shares the responsibility for the tragedy.

Why not let God speak for Himself from the pages of His “God-breathed” Word? By way of a number of godly men whom He inspired, He is the One Author of His cohesive, written revelation to mankind about who He is, what kind of God He is, and exactly how He relates to people, who were His idea in the first place. The Bible says that Satan is the one who now holds the power of death, that is, he is the ultimate cause of death. This is either directly via evil spirit intervention, such as a spirit of murder causing one person to murder another, or indirectly via one of the countless diseases he has introduced into the world, by destructive weather, or by a myriad of “accidents.”

Hebrews 2:14
Since the children have flesh and blood, he too shared in their humanity so that by his death he might destroy him who holds the power of death—that is, the devil

Suppose you are sitting in a restaurant visiting with two friends, Bill and Joe. Bill sees a guy with a lead pipe in his hand sneaking up behind you. He turns to Joe and asks, “How’s your family?” When you wake up, don’t you think you will blame Bill almost as much as you blame the guy who hit you with the pipe? Who can truly love a God who causes suffering or one who could stop it, but just decides to “allow” it to happen?

In the beginning, God decided to give both angels and man genuine free will. God is love (1 John 4:16) and true love requires giving the other party freedom not to reciprocate love. Thus, God “allowed” or “permitted” the possibility of evil in order to make possible an unforced response of genuine goodness and love. If something contrary to His will happens, it is because God cannot at that moment stop it without going against His own nature. How could that be? We believe there are three very good reasons:

First, because although He is the most powerful One in the spiritual war currently raging between good and evil, His righteous nature requires Him to act justly even toward His formidable foe, the Devil. Second, He cannot usurp anyone’s personal freedom of will. Third, His justice requires Him to allow people to experience the consequences of their disobedience. [For further study read our article “Is God in Control?”]

To say that God cannot always stop evil flies in the face of many Christians’ fatalistic concept of “the sovereignty of God,” a phrase, by the way, not found in Scripture. To most Christians, this means that God is ruling over everything that happens and is thus responsible for it all. Most Christians have also been taught that God is “omnipotent,” which according to Webster’s actually means “all powerful.” Obviously God does not have all power because Satan also has plenty. We believe that most Christians use the term “omnipotent” to mean that God has the most power and, therefore, can do whatever He wants. Although we certainly believe that God is the most powerful, His Word shows that He cannot always do whatever He wants whenever He wants to. Clearly, He has limited Himself in His Word as to what He will and will not do.

Despite how much we may love to sing the verses of “Joy To The World” at Christmas time, a quick glance at any newspaper or a television news program blatantly shows that Jesus is not ruling on the earth because the place is an absolute mess. Paradise is definitely lost. More definitively, there are a number of Scripture verses that make it plain that the world is not yet subject to the rule of the Lord. For example:

1 Corinthians 15:24–26
(24) Then the end will come, when he hands over the kingdom to God the Father after he has destroyed all dominion, authority and power.
(25) For he must reign until he has put all his enemies under his feet.
(26) The last enemy to be destroyed is death.

It is obvious from the above verses that there is some “dominion,” some “authority,” and some “power” that is not yet subject to the Lord. Furthermore, it is obvious that death is an enemy of God not a tool He uses, and that it is not yet destroyed. Here are more pertinent verses:

Hebrews 10:12 and 13
(12) But when this priest [Jesus Christ] had offered for all time one sacrifice for sins, he sat down at the right hand of God.
(13) Since that time he waits for his enemies to be made his footstool.

Because the Lord Jesus is now waiting for his enemies to become his footstool, it is obvious that they are not yet under his subjection. But God is the most powerful and most wise one in the fight, and that means that human history as a whole will be resolved according to His will. The “whole” will be made up of the parts of human history—individuals—who chose to believe God’s Word and do His will.

In regard to God’s eventual victory, consider the analogy of a chess match between former World Chess Champion Bobby Fischer and the president of a high school chess club. Although the latter might capture a few of his opponent’s pieces and perhaps, to an untrained eye, even appear to gain the upper hand at some point, the outcome is never in doubt. No matter what the lesser player may do by the freedom of his will, the master player always has a superior strategy that will result in ultimate victory. Likewise, God need not stoop to manipulating His opponent in order to achieve His goals.

Hearing that God is not controlling everything that happens may at first cause some Christians great consternation and even feelings of helplessness. Perhaps this is because they have actually trusted more in fatalistic pre-determinism than in the love, power, ability, resourcefulness, and willingness of God to keep His promises regarding the present and the future. Also, this truth “ups the ante” in regard to the importance of one’s personal choices in response to God’s directives.

As we see it, here are the only alternatives:

(A) There is no God, your great-grandfather was a lizard and life is a “crapshoot.” Good luck!

(C) There is a God who determines everything that happens. He is able and willing to both help you and hurt you, and there are no guarantees which He will do, or when He will do it. Good luck!

(D) There is a God who once made a Paradise for man and who has guaranteed for those who believe His Word that it will one day again be so. In the meantime, He and His Son are far more powerful than their (and your) enemy, and they are doing their absolute best for you each day. You have God’s Word on it. You don’t need “luck.”

Which sounds best to you? When properly understood, this truth will for you result in greater love for God, greater hatred for the Devil, and greater desire to obey God’s wonderful Word, which contains “…everything we need for life and godliness…” (2 Pet. 1:3).