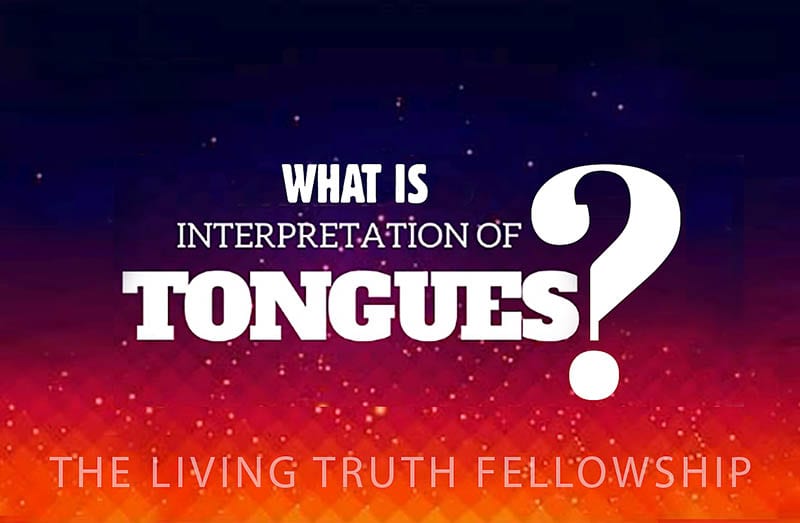 FAQ: I read your FAQ about Speaking In Tongues, and I understand that it is one of the nine manifestations (not gifts) of holy spirit available to each and every Christian, the evidence of one’s New Birth, and a way to perfectly and intimately praise and worship God, but what is interpretation of tongues and how is it to be used?

A: It is vital to understand that speaking in tongues and interpretation of tongues are, in fact, manifestations, that is, evidences of the gift of holy spirit [Link to “The Gift of Holy Spirit: The Power To Be Like Christ”], the divine nature of God that each person receives when he confess Jesus as Lord and believes that God raises him from the dead] (Rom. 10:9). For centuries, millions of sincere Christians who longed to speak in tongues have been denied that joy by erroneous teaching that led them to consider it a gift. We all know that the only way to get a gift is for someone else to give it to us, and those multitudes of disappointed Christians believed that they had not been given the “gift of tongues.”

The truth is that the “gift” each and every Christian has been given is holy spirit, the divine nature of God (the “Holy Spirit”), the Giver of the gift. It is the “incorruptible seed” (1 Pet. 1:23) that our heavenly Father deposits in each of His children at the moment of their New Birth. With that truth firmly established, it is simply a matter of being properly instructed in how to use what you already have.

Properly translated, no verse of Scripture refers to speaking in tongues, interpretation of tongues, prophecy, et al., as a “gift.” In 1611, translators of the KJV graciously italicized those words that they added to the Greek text to make it read more smoothly in English. Sad to say that most modern versions do not afford the reader that benefit, and even take the unfounded liberty of adding words in English that are nowhere in Greek. For example, 1 Corinthians 14:1 in the NIV: “Follow the way of love, and eagerly desire spiritual gifts, especially the gift of prophecy.” There is no word “gift” in the Greek text, and the verse should read: “Follow the way of love, and eagerly desire spiritual things, in order that you may prophesy.”

Suppose you receive a Swiss Army knife for Christmas. How many gifts do you receive? One. But how many uses (manifestations) might it have? Maybe it has a big blade, a small blade, a screwdriver, an awl, a corkscrew, a chisel, scissors, a file, and a toothpick—nine ways to use the one gift. That is just about the perfect analogy to the gift of holy spirit and its nine manifestations, ways the gift can be used to benefit the believer himself and those he reaches out to in Christ’s love.

It is important to note that speaking in tongues and interpretation of tongues are the only manifestations of holy spirit not present in the Hebrew Scriptures (each of the other seven were clearly in operation). Our FAQ about speaking in tongues explains why this is the case, and it has to do with the uniqueness of salvation in this current “Administration of the Sacred Secret” that began on the Day of Pentecost and will end with the “Rapture” of the Christian Church. Speaking in tongues is the indisputable proof that one is born again of incorruptible seed and forever sealed in Christ, something never available in the Hebrew Scriptures or the Gospels. As the companion manifestation to speaking in tongues, interpretation of tongues was not available before the Day of Pentecost.

What is interpretation of tongues? It is the companion manifestation to speaking in tongues, designed to be utilized in a body of believers, such that one proclaims in the language of those believers the meaning of what he has just spoken in tongues. Used together in a corporate setting, these two manifestations “edify the church” (1 Cor. 14:5). Properly translated, 1 Corinthians 14:13 says that anyone who speaks in tongues amidst a group of Christians should do so “in order that he may interpret.” The point of speaking in tongues in a body of believers is to follow it with the interpretation so that they are edified.

Thus we see that speaking in tongues has both a private and a public aspect to it. Privately, it is for your communion with your heavenly Father, and for your own edification (1 Cor. 4:2 and 4). Publicly, it is to be accompanied by the manifestation of interpretation of tongues, so that those present are edified and enriched by your praise and worship of God (1 Cor. 14:5).

Is it available to speak in tongues and then interpret when you are by yourself? No Scripture prohibits that, so the answer is yes, but, of course, no one else will be edified by the interpretation.

At first glance, 1 Corinthians 14:27 might seem to contradict that, but a close look at the verse shows that it says the same thing as the above verses. The NIV misses the point with its translation of “…someone must interpret.” The KJV reads: “…and let one interpret,” which isn’t much better. When we dig a bit deeper, we see that the Greek word for “one” is heis, which can mean “the same one,” and, according to the context, is how it should have been translated so that it agrees with verses 5, 13, and 15.

It is important to note that we can seldom go farther than we are taught. If Christians are taught that one person is to speak in tongues and another is to interpret, and that the interpretation is a message from God to the people, that is what they will believe and act upon. What then happens is that the person who thinks he is interpreting is, in fact, prophesying, because the manifestation of prophecy is a message from God to His people that edifies, encourages, and comforts them. So words from God will be there, via the gift of holy spirit, for the one who thinks he is interpreting, but what he is actually doing is prophesying.

It is unfortunate that so many wonderful Christians of such a “Pentecostal”/“Charismatic” persuasion, who do highly value praising and worshiping God, and whose services are filled with beautiful songs of praise, are missing out on the joy of properly utilizing the manifestation of interpretation of tongues. If you are of such persuasion, we hope that this article helps you to better understand this magnificent manifestation by which you can even more exquisitely extol the virtues of our great big, wonderful God.

How does interpretation of tongues work and how do you do it? It works just like speaking in tongues, in that you must open your mouth and speak, and when you do, God gives you the words. When you speak in tongues, the words God gives you are in a language of men or of angels. When you interpret, the words will be in English or whatever is the prevailing language of that particular body of believers. So, you open your mouth and speak in tongues for however long you choose, maybe 20, 30, or 60 seconds, as you are inspired—and when you stop speaking in tongues, you immediately speak the first English (or whatever) words that are “on the tip of your tongue,” and they will be there, because God is never late. Then just keep speaking the words that come to you. And you know that the words will be in the category of praise and thanksgiving to God.

If you have been taught that the interpretation of tongues is a message from God to people, and you are in the habit of doing it like that, here’s a tip that will help you more easily make the transition from speaking in tongues and then prophesying to the actual interpretation of tongues. While you are speaking in tongues before you interpret, your mind is not involved in that, so tell yourself as often as you need to, “Do not begin the interpretation with ‘My children.’ Start with ‘My Father’ or something else addressed to God.” Then your first words will be “not to men but to God,” and you will find that the rest of what you say will be in that same vein. Amen.

One key to developing your ability to utilize the manifestation of interpretation of tongues is to build what you might call a “praise vocabulary.” That is, put in your mind, and begin to use in your prayers and your speech, words of praise, worship, thanksgiving to and about God and the Lord Jesus. OK, where could you find words like that? Hey, how about the book of Psalms? Right on—it is loaded with heartfelt exclamations of God’s magnificence, His goodness, His unfailing love, His limitless patience, His abounding mercy and forgiveness, and His power to deliver His people (e.g., Ps. 8, 19, 23, 33, 47, 67, 84, 93, 96, 100, and 150). Certainly every Christian has experienced at least some of these aspects of God’s heart, and interpretation of tongues helps to magnify our Father to us. Go for it.