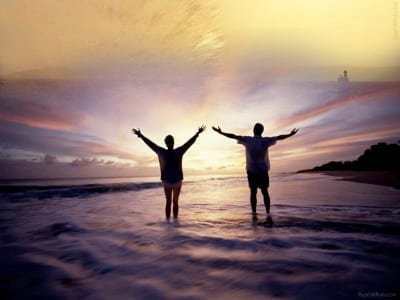 Well, take a look around at the world. The place is a zoo, and that is unbearably euphemistic. More literally, people are suffering on a scale no human mind can begin to grasp. Paradise is so lost. Then compare the world today with what the Word of God says about the time when Jesus rules the earth and see if the two line up. Of course, to do that one must know what the Bible says about the Millennial Kingdom, a “preview of coming attractions” regarding the restored Paradise, both of which will be on earth.

For a thorough biblical exposition of that subject, I refer you to our book, “Don’t Blame God!” The purpose of this brief FAQ is to motivate you to consider what may be a different point of view than you now have and to whet your appetite to chew on our work that covers the subject in detail.

The Word of God says that after Jesus returns to the earth and leads God’s people to victory in the Battle of Armageddon, he will rule the earth for 1000 years, and do so “with a rod of iron,” that is, he will not allow anyone to get out of line and do the kinds of hurtful things countless people today are doing. During that time, there will be peace on earth, with no war, no sickness, no injustice, no danger from the elements or from wild animals, and plenty of food for everyone (Isa. 2:1–4, 11:1–9). Obviously, that world stands in stark contrast to ours today, so we should at least question whether or not Jesus is ruling the world now.

Let’s think about the words to the wonderful Christmas carol, “Joy to the World.” Does it pertain to the present or to the future? It sure doesn’t look like the earth “received her king.” Actually, he was murdered. And there are at least a few hearts that are not “preparing him room”—Osama bin Laden, Saddam Hussein. Going barefoot will prove that “no thorns infest the ground” can’t be talking about now. What about: “He rules the world with truth and grace, and makes the nations prove the glories of his righteousness” (Ps. 2:1–12)? I don’t think so—Christianity is illegal in some countries. But hey, we can certainly still sing the song and enjoy it with the anticipation of its future fulfillment.

A study of the word “kingdom” in Scripture will clearly show that the “kingdom of God,” also called the “kingdom of heaven,” is a literal, still-future reality, which is most specifically relative to Israel. Basically, the message of the Old Testament is that God chose Israel as the people from whose bloodline the Redeemer would come; that at his first coming to the earth to the nation of Israel he would be rejected as their king, suffer, and die; that he would later come again to the earth to save Israel, this time as the conquering king and rule from Jerusalem for 1000 years; and that he would finally create a new heaven and earth, where he and God will rule forever. Every believing Jew was looking forward to the Messiah and that kingdom.

Logically, there can be no “king-dom” without a king, and a king is not really a king unless he has a kingdom. As of now, Jesus has no kingdom—it is still in the future. If he were ruling the earth now, it would be in much better shape. We today are not living in the Kingdom, building the Kingdom, or advancing the Kingdom. Neither can we do anything to bring the Kingdom to pass. Only Jesus, the King, can do that and one day he will.

Today, Jesus is “Lord,” the one highly exalted by God (Phil. 2:8–11). He is “the Head of the Body” of Christ, which Body Scripture refers to as “the Church” (that word means a called-out group of people) that is, all Christians. As each of us makes a free-will decision to invite and allow the Lord Jesus to lead and guide us, he is, in a sense, the “king” of our heart. As the members of his Body listen to and obey him, he reaches out to a dark and dying world, and all who choose to make him their Lord are guaranteed everlasting life in his future kingdom on earth.