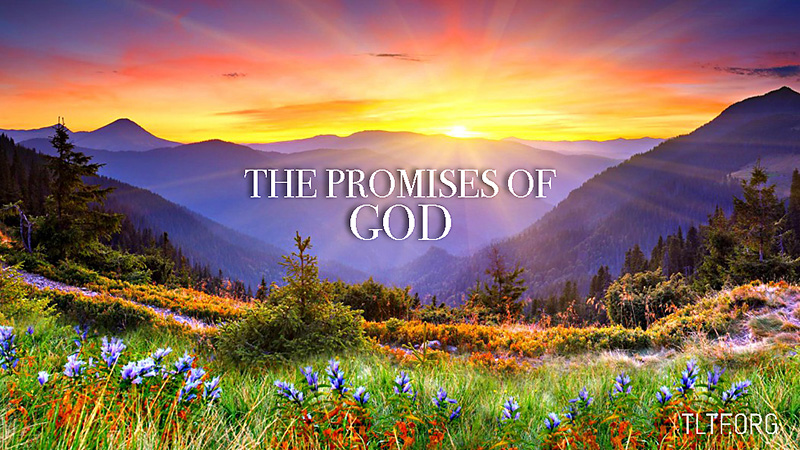 Well, for the past number of months, as it is before every election, we have heard political candidates make plenty of promises. The sad testimony of history is that relatively few of them are ever kept. Not so with our GOD.

If you have listened to our teachings, you may now have a tattoo echoing our oft-repeated declaration: WORDS HAVE MEANINGS! So, what is a “promise”? Here’s an excellent definition: “A declaration of intent, either written or verbal, that binds the promisor to the promisee, and gives the promisee the right to expect either the performance [I will do it] or the forbearance [I won’t do it] of the deed.” Although men lie and do not keep their promises, God cannot violate His own nature of pure love and goodness, as the following two verses make clear.

Titus 1:1-3
1 Paul, a servant of God and an apostle of Jesus Christ to further the faith of God’s elect and their knowledge of the truth that leads to godliness— 2 in the hope of eternal life, which God, who does not lie, promised before the beginning of time, 3 and which now at his appointed season he has brought to light through the preaching entrusted to me by the command of God our Savior.

Consider these sterling words regarding our Father’s plethora of promises:

2 Peter 1:2-4
2 Grace and peace be yours in abundance through the knowledge of God and of Jesus our Lord. 3 His divine power has given us everything we need for a godly life through our knowledge of him who called us by his own glory and goodness. 4 Through these he has given us his very great and precious promises, so that through them you may participate in the divine nature, having escaped the corruption in the world caused by evil desires.

GOD is the Promisor, and YOU is the Promisee. A promise implies that the one who promises has both the ability and the willingness to fulfill what he states, and the following verses show that our Heavenly Father surely does.

Psalm 62:11-12
11 One thing God has spoken, two things I have heard: “Power [ABILITY] belongs to you, God, 12 and with you, Lord, is unfailing love” [WILLINGNESS]; and, “You reward everyone according to what they have done.”

When it comes to God, “willingness” is putting it mildly. Actually, He has a burning passion to do far more for each of His children than we can imagine. One way you know someone loves you is that he keeps his promises to you. Both Scripture and “His-story” are replete with examples of God’s abiding faithfulness to do what He says He will do. Genesis 3:15 is the first, and maybe the most comprehensive, of all the hundreds of promises that follow in His Word. As the Redeemer of fallen mankind, JESUS CHRIST IS THE PROMISE.

Genesis 3:15 is also the first of many promises that God made to His Son. The Hebrew Scriptures (Genesis—Malachi) are the blueprint for the Redeemer/Messiah’s life’s work in restoring God’s shattered dream of a perfect race on a perfect earth. God’s prophecies about Jesus were in essence requests that His Son carry out his monumental mission, and they contained promises that He would help him fulfill them. Ditto for you and me.

And let’s consider some of what He promised His chosen people, Israel.

Genesis 18:19
For I have chosen him [Abraham], so that he will direct his children and his household after him to keep the way of the Lord by doing what is right and just, so that the Lord will bring about for Abraham what he has promised him.”

We see here that obeying God’s Word allows us to receive what He has promised us. Like a quarterback calling a play for his receiver to run a certain pass pattern, and expecting to throw the ball to him where he is supposed to be, we must run our designated routes so we can “catch” the promises of God. Unlike human quarterbacks, who sometimes miss their target, our God is always right on the money.

Deuteronomy 6:3
Hear, Israel, and be careful to obey so that it may go well with you and that you may increase greatly in a land flowing with milk and honey, just as the Lord, the God of your ancestors, promised you.

Joshua 23:14
“Now I am about to go the way of all the earth. You know with all your heart and soul that not one of all the good promises the Lord your God gave you has failed. Every promise has been fulfilled; not one has failed.

And in regard to God keeping His promises to Israel, some of which are yet to be fulfilled in the Millennial Kingdom, here’s a wonderful verse:

Romans 15:8
For I tell you that Christ has become a servant of the Jews on behalf of God’s truth, so that the promises made to the patriarchs might be confirmed.

During hard times, of which there are many, we can hold fast to God’s promises of deliverance, and be encouraged by them.

Psalm 119:48-50
48 I reach out for your commands, which I love, that I may meditate on your decrees. 49 Remember your word to your servant, for you have given me hope. 50 My comfort in my suffering is this: Your promise preserves my life.

There is no promise our Father has made that He will not keep, including those way up the road, so to speak. The following verse goes hand-in-hand with 1 Timothy 2:4, which says that God “wants all people to be saved, and come to a knowledge of the truth.”

2 Peter 3:9
The Lord is not slow in keeping his promise, as some understand slowness. Instead he is patient with you, not wanting anyone to perish, but everyone to come to repentance.

In regard to our miraculous new birth, our membership in the unique Body of Christ, and our absolute assurance of everlasting life in Paradise, God tells us:

Ephesians 1:13,14
And you also were included in Christ when you heard the message of truth, the gospel of your salvation. When you believed, you were marked in him with a seal the promised holy spirit. 14 which is a deposit [Gr. arrabon=guarantee; cp. 2 Cor. 5:5], guaranteeing our inheritance until the redemption of those who are God’s possession—to the praise of his glory.

What God has done for us in Christ, what He is doing for us each day, and what He will do for us forever should motivate us to relentlessly reciprocate by manifesting the holiness with which He has gifted us, standing firmly, letting nothing move us, and always giving ourselves fully to the work of the Lord, because we know that our labor in the Lord is not in vain.

2 Corinthians 6:18-7:1
18 And, “I will be a Father to you, and you will be my sons and daughters, says the Lord Almighty.” 1 Therefore, since we have these promises, dear friends, let us purify ourselves from everything that contaminates body and spirit, perfecting holiness out of reverence for God.

No matter what happens in our presidential election this week, our future is every bit as bright as the many promises our God has given us, both day-by-day and in the big picture. All of them were made possible by the freely obedient SON OF GOD, Jesus Christ. And the greatest of these is our glorious HOPE of his coming to rescue us from this present evil age and take us to an even brighter future that has no end.

2 Corinthians 1:18-22
18 But as surely as God is faithful, our message to you is not “Yes” and “No.” 19 For the Son of God, Jesus Christ, who was preached among you by us—by me and Silas and Timothy—was not “Yes” and “No,” but in him it has always been “YES!” 20 For no matter how many promises God has made, they are “YES” in Christ. And so through him the “Amen” is spoken by us to the glory of God. 21 Now it is God who makes both us and you stand firm in Christ. He anointed us, 22 set his seal of ownership on us, and put his spirit in our hearts as a deposit [arrabon], guaranteeing what is to come.

Diversity is an integral part of the Christian experience. When we consider God, we see His diversity in everything He creates, and since He created us in His image, and gave us freedom of will, our lives should reflect this diversity as well.

As Christians working alongside each other to do the Lord’s will, our diversity should be evident as we each carry out our specific functions within the Church. It is through our combined strengths that the Church is to stand in this dark age. And while differing opinions at times puts us in conflict with one another, we’re able to work things out with Scripture as our guide so that we can reach sound and truthful conclusions. We live in a time, however, when diversity has become an idol and is practiced for the sake of diversity. In this quest for relentless change, our culture has abandoned many of moral truisms that have given civilizations strength and longevity throughout history. In this crucial time Christians must stand for the non-negotiables of God’s Word.

Jon Touchstone expounds upon those non-negotiables that we, as followers of Christ, should be considering when heading to the voting polls: the sanctity of life, the sanctity of marriage, and religious freedom.

God’s Word Is Not Negotiable (60 mins)

How do you know if someone loves you?
He keeps his Word!

A PROMISE is a declaration, either written or verbal, that binds the promisor to the promisee and gives the promisee the right to expect either the performance or the forbearance of the deed. A promise is the basis of every successful relationship, the quality of which is directly proportional to promises made and kept.

The Promises in God’s Word is segment five in the TLTF seminar:
One Day With The Creator – Watch for free at: JustTruthIt