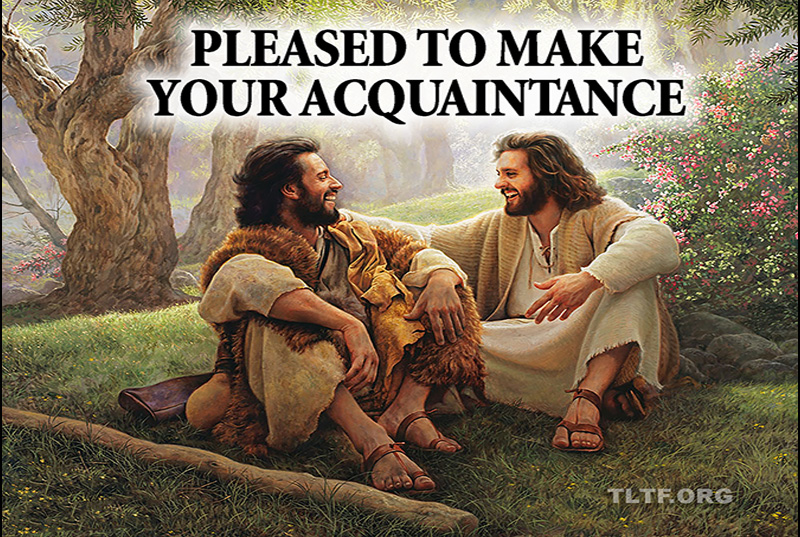 The beginning of a new year is often a time of reflection and rededication for people. We reflect on the past year, taking inventory of our achievements and failures, which is often followed by at least a mental outline of what we hope to accomplish in the coming year. Such musings are not uncommon to most of us. In fact, there is an entire genre of books and seminars available to help us set goals, make plans, and clarify our dreams for a future we desire. I too have partaken of more of these “self-help” books than I care to admit. Yet, year after year I rarely found fulfillment despite my best efforts to stay on track with my goals.

So, I concluded that goal setting and following a diligent calendar agenda simply doesn’t work for me. My ambitions are too fluid and varied to be reduced to paper with a set of step-by-step objectives to be crossed off. Instead, I have endeavored to put one thing first every year, “knowing Jesus”. Now, I’m not speaking of knowing more “about” Jesus; instead, I’m speaking of knowing him in the same way the Apostle Paul stated it in Philippians.

Philippians 3:7-11 REV
“But whatever things were gain to me, those I have considered loss because of Christ. But even more than that, I consider all things to be loss for the surpassing value of knowing Christ Jesus my Lord, for whom I suffered the loss of all things and consider them dung in order to gain Christ and be found in him, not having a righteousness of my own that comes from the law, but that which is through trust in Christ—the righteousness that is from God by trust. My goal is to know him, to experience the power of his resurrection and the sharing of his sufferings, becoming conformed to his death, and so, in some way, I will arrive at the resurrection out from among the dead.”

Can there be any greater goal in life? To know Jesus in the same way we know our spouse and children; maybe even more so. This kind of knowledge goes way beyond simply being able to understand or explain who Jesus is from a Biblical perspective. The knowledge that Paul is speaking of is that of having become intimately familiar with another person, the risen Jesus Christ. How do we mortal humans aspire to such divine heights? How did Paul?

Upon their first meeting as recorded in Acts chapter 9, Paul asked one simple question, “Who are you, Lord?” A specific and direct question from an inferior to a superior. Paul had experienced an awakening that some powerful entity far greater than himself had interrupted his goal of persecuting the saints. So, he replied humbly and honestly, “who are you?’. This encounter is more fully told by Paul when he appeared before Agrippa in Acts 26 wherein, he affirms that he was not disobedient to the heavenly vision given to him by the risen Lord Jesus and immediately set out to obey him.

As we embark upon this new year, please take some time to reflect on this question, “Have I ever got alone and asked the Lord Jesus to make himself known to me?” Or am I stuck in setting my own goals, making my own plans and content to know “about” Jesus rather than know him in the same way I know my best friend? If we do ask him to reveal himself to us, who knows, he may reply, “Pleased to make your acquaintance. Let’s talk”!

During the last supper Jesus shared numerous promises with his disciples present that night. Among them was this one about the coming “helper” which we understand as the holy spirit, Christ in us.

John 14:15-21 REV
“If you love me, you will keep my commandments, and I will ask the Father, and he will give you another helper, which will be with you forever. This helper is the spirit of truth, which the world is not able to receive, because it does not see it or know it. You know it, for it is present with you, and will be in you. I will not leave you as orphans: I am coming to you. A little while longer and the world will see me no more, but you will see me. Because I live, you will live also. In that day you will know that I am in union with my Father, and you are in union with me, and I am in union with you. Whoever has my commandments, and keeps them, that is the one who loves me. And whoever loves me will be loved by my Father, and I will love him, and will reveal myself to him.”

The spirit of Christ is more than our tool for operating manifestations. It is our connection with Jesus and our Father, YAHWEH. By it, we receive help as Jesus reveals himself to us.

There was a time in my life when I believed that knowing the Bible was equal with knowing Jesus. I no longer believe such to be true. We can certainly know many wonderful things about Jesus from the Bible. But, knowing him in the way that Paul expressed and demonstrated in his life was far more than scriptural understanding. His knowledge and that which Jesus expressed at the last supper, only comes from personal interaction and intimacy. That is where I long to live and I believe you do as well.

This new year may we all seek time alone in worship, prayer and open discussion with him who lives forever, Jesus Christ our Lord!

All My Love,
Gary Lee Corns