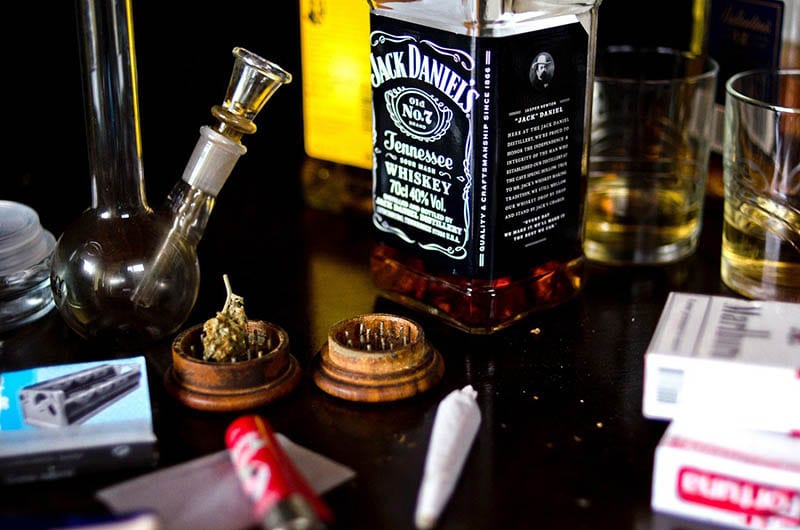 The Word gives no prohibition in regard to drinking alcoholic beverages but it does say that getting drunk is a sin (1 Cor. 5:11; Eph. 5:18). Why? Because life is a spiritual battle, and we have a mortal enemy, Satan, who is crafty, and very good at what he does. Your God-given mental faculties are vital for you to control.

2 Corinthians 10:5b (NKJV) calls this, “…bringing every thought into captivity to the obedience of Christ.” That is how we steel our minds against our enemy, Satan, who is constantly bombarding us with stimuli designed to hijack our thoughts in an ungodly direction and cause us to act in an ungodly fashion, and eventually open our minds to evil spirit influence.

Proverbs 4:23
Above all else, guard your heart, for it is the wellspring of life.

When one is drunk, he is, in reality, out of his mind. He cannot guard his heart, and opens himself up to the possibility of evil spirits entering his mind and causing confusion or harm to himself or others.

The Bible puts using drugs in the same category as getting drunk (Gal. 5:19–21): both are forbidden by God because of what they do to the individual personally, and how they make him unfit to minister to others. The Word of God is “instruction in righteousness” (2 Tim. 3:16–KJV) that can be applied by wise people. LSD, crystal meth, crack, etc., did not exist in biblical times, so God did not mention them in the Bible. What God does say is that each Christian is a minister of God to His people, and should be alert and prepared to serve at all times. Being drunk or high on drugs renders one incapable of being effective for God.

Drugs used to alter one’s mental state and thus “escape reality” do the same thing that excess alcohol does, that is, they render a person “out of control” of his mind. Many drugs are hallucinogenic, and a hallucination is “a false notion, belief, or impression; illusion; or delusion.” In the Bible, the Greek word for “truth” means “reality.” Satan’s goal is to get people to act upon a false reality.

When translated properly, Scripture does address the illicit use of drugs, and connects it to drunkenness, as per the following verses, where the Greek word for “witchcraft” is pharmakeia, which includes “the use or the administering of drugs” and “poisoning [by drugs].” The variant, pharmakon, in Revelation 9:21 focuses upon “the use of certain potions or drugs” and the casting of spells. This same root word is also translated as “sorcerer” and “sorceries” (see Rev. 9:21, 18:23, 21:8, 22:15). The translation “witchcraft” is used in most English versions because pharmakeia also referred to the witchcraft or sorcery in which drugs were used for potions, spells, etc. It also appears, along with drunkenness, in the list of the “works of the flesh” in Galatians.

Recreational and hallucinogenic drugs were not invented in San Francisco in the 1960s. They have been weapons in Satan’s arsenal for thousands of years, and they have contributed significantly to the destruction of millions of people’s lives, as both Scripture and history attest.

There are other biblical truths that make it clear that the use of recreational and hallucinogenic drugs is harmful. We are to take care of our bodies so as to be able to serve God for many years, and such drugs are physically debilitating. Also, we are to steward the financial resources that God gives us, and using our money to buy such drugs is hardly good stewardship. Beyond that, many drug users turn to crime to support their habit, and those crimes range from stealing from other addicts to murdering innocent people to get their “fix.” Thus, beyond the sin of the drunkenness or drug use itself are the sins of lying, stealing, and murder to which such a lifestyle leads. In short, using drugs robs us of “the life that is truly life.”

Many users say they are looking for peace, joy, and the “high” that such drugs give them. How sad. Anything someone categorizes as something good that a drug does for him is something only God, our heavenly Father, can give us through Jesus Christ. God designed us to enjoy life and be engaged in it, and the so-called benefits of drugs and alcohol are a counterfeit at best. Recreational drug use and getting drunk is selfish and dangerous, and addiction is not an escape from pain; it is pain in the worst way, as countless thousands of ex-addicts sadly testify.

In contrast, an intimate relationship with the Lord Jesus brings us all those things, and more. Thus we need not despair and grope for artificial means of altering our mental state. We are so full of joy and peace that anything that alters that state would be “a downer.” For further study see these articles: “What Does the Bible Say about Drugs and Drinking Alcohol?” “The Urgency of Obedience;” “Is It Wrong for Christians To Be Part of a Nudist Colony?” and “Iron Sharpens Iron – Fruit of Divine – December 2012.”