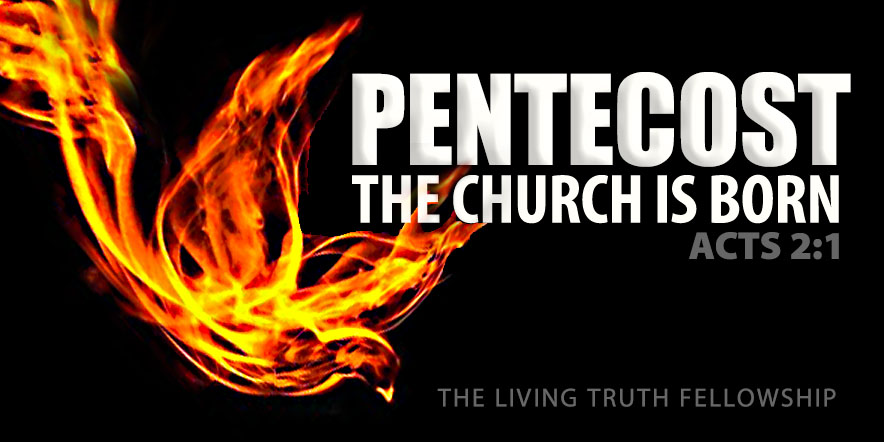 As you probably know, something unique happened on the particular Pentecost holiday recorded in Acts 2, fifty days after the Jewish Passover. That’s when God chose to birth the ekklesia, the “Body of Christ,” the first human beings ever “born again of incorruptible seed”—permanently! What a celebration that was in God’s Maternity Ward when Jesus’ mother and his disciples were among the “about 120,” followed shortly that day by the “about 3000,” who became the first believers filled with holy spirit, His divine nature.

On May 31 we Christians will mark that monumental occasion, which ranks among “The Top Ten” events of His-story, right up there with the Creation of heaven and earth, the Renovation of the ruined earth, the Creation of mankind, the Fall of Man, the Birth of Jesus Christ, his Resurrection, the Gathering Together, his Return to the earth to set up his kingdom, and his Creation of a new heaven and earth. Therefore, in this letter we will explore what occurred on that Pentecost, and why is it so significant for us today.

No doubt most important was the advent of the new birth God made available through the obedience of His Son. Whenever it was, one split-second decision you made to adhere to Romans 10:9 guaranteed you everlasting life in Paradise. In the meantime, becoming a child of God also secured for you access to God’s inner sanctum, previously known as “the Holy of Holies.” In dealing with His chosen people, God allowed only the High Priest to enter into His heart of hearts, if you will, and that only once a year. Contrast that with what you have now, when you can walk right into God’s presence, jump up onto His lap, and say to Him whatever you want. And He listens intently, as if you were His only child.

By way of God’s gift of holy spirit, you were equipped to become like Christ and do the works that he did. Limitless vistas of opportunity were opened to you moment-by-moment, reinforced by the glorious Hope of Christ’s coming for us. It is interesting that the Tabernacle, God’s first dwelling place, was mobile, while His second, the Temple, was permanent. Now you and I are His third dwelling place and, in one sense, we have both the mobility of the Tabernacle and the permanence of the Temple in our salvation. Before we close—wait for it, we’ll see God’s fourth and final dwelling place.

As an aside, it seems that many people think that the Devil’s address is a combustible place called “Hell,” where he will agonizingly entertain all bad people forever. As you know, there is no such place, and that is a lie designed to make God look incredibly mean and inequitable.

God’s address now? Those who are Pantheists would say, “Everywhere,” including Twinkies. A more biblically accurate answer would be “the heaven of heavens,” where the Creator currently sits with His Divine Council. As I type that phrase, I think of its initials, “D.C.”, as in Washington, our nation’s capital. If you live in the USA, you may be thinking what I am: There’s no way those two “D.C.s” could be confused!

On that spectacular Pentecost, Peter knew only what Jesus had taught him from Genesis-Malachi. He did not know the Secret that the risen Lord later revealed to Paul, who laid it out most vividly in Ephesians. Looking back, we know that what happened that day was not the fulfillment of anything Joel prophesied, because Joel had no inkling of anything about this current Administration of the Secret. But what Peter quoted from Joel was applicable because part of the Secret is that a new group of believers, neither Jew nor Gentile, now gets to partake of the holy spirit aspect of God’s future New Covenant with Israel. What all “Old Testament” saints will have in their resurrected bodies, we have NOW in these earthen vessels. As per Romans 8:23, you and I have “the firstfruits of the spirit” as our guarantee of everlasting life.

In that vein, the prevailing teaching among Christians today is that our faith has “Jewish roots,” but that is false. This Administration of Grace, which began on that Pentecost, is a brand new, completely unique, heretofore unknown truth, a “program” totally separate from God’s dealings with Israel—until the Millennial Kingdom when both Christians and believing Israelites will be together on the new earth. Also, some believers think Jesus was a Christian, which of course he was not. In fact, he had no inkling of the body of believers he would head until after his resurrection when God first told him.

As it relates to mankind, God’s original address was The Garden of Eden, in Genesis 1-3. There He walked and talked with Adam and his wife, hoping for them to enlarge the human family exponentially. But His prototype human turned against Him and pierced His loving heart. God’s lament, “Adam, where are you?” has since echoed through the vaults of time as He has reached out to, and searched for the allegiance of, each person ever born.

Adam’s sin, passed down to every one of his offspring, shattered mankind’s spiritual reverie and separated us all from our loving Creator. Only another “Adam” could rectify that breach and bridge the cavernous gap between God and man. As Adam got “lost” in Eden, so we, his descendants, are lost in this fallen world until Jesus finds us. Let the following verses wash over you and energize you:

Ephesians 2:13-22
But now in Christ Jesus you who once were far away have been brought near by the blood of Christ. 14 For he himself is our peace, who has made the two groups one and has destroyed the barrier, the dividing wall of hostility, 15 by setting aside in his flesh the law with its commands and regulations. His purpose was to create in himself one new man out of the two, thus making peace,16 and in one body to reconcile both of them to God through the cross, by which he put to death their hostility. 17 He came and preached peace to you who were far away and peace to those who were near. 18 For through him we both have access to the Father by one spirit. 19 Consequently, you are no longer foreigners and strangers, but fellow citizens with God’s people and also members of his household, 20 built on the foundation of the apostles and prophets, with Christ Jesus himself as the chief cornerstone. 21 In him the whole building is joined together and rises to become a holy temple in the Lord. 22 And in him you too are being built together to become a dwelling in which God lives by his spirit.

God has chosen to dwell within the heart of each person who chooses to make Jesus Christ Lord. Consider how lavish and how detailed were the Tabernacle and the Temple. All those fabulous accoutrements point to God’s care of, and provision for, us today. The following verses show that our Heavenly Father is eagerly awaiting His final move, from heaven to earth.

Revelation 21:1-51
Then I saw “a new heaven and a new earth,” for the first heaven and the first earth had passed away, and there was no longer any sea. 2 I saw the Holy City, the new Jerusalem, coming down out of heaven from God, prepared as a bride beautifully dressed for her husband. 3 And I heard a loud voice from the throne saying, “Look! God’s dwelling place is now among the people, and he will dwell with them. They will be his people, and God himself will be with them and be their God. 4 ‘He will wipe every tear from their eyes. There will be no more death’ or mourning or crying or pain, for the old order of things has passed away.” 5 He who was seated on the throne said, “I am making everything new!” Then he said, “Write this down, for these words are trustworthy and true.”

God will again dwell with men—as He did in the Garden of Eden. Until then, His address is 1 You Street. It’s a fixer-upper, a piece of work, and God & Son. Inc. are tender and gracious renovators. Give them a buzz and see if it’s time for some Spring cleaning.

Psalm 84:1-4, 10
How lovely is your dwelling place, Lord Almighty! 2 My soul yearns, even faints, for the courts of the Lord; my heart and my flesh cry out for the living God. 3 Even the sparrow has found a home, and the swallow a nest for herself, where she may have her young—place near your altar, Lord Almighty, my King and my God. 4 Blessed are those who dwell in your house; they are ever praising you…10 Better is one day in your courts than a thousand elsewhere; I would rather be a doorkeeper in the house of my God than dwell in the tents of the wicked.

We now have God’s indwelling presence every day!