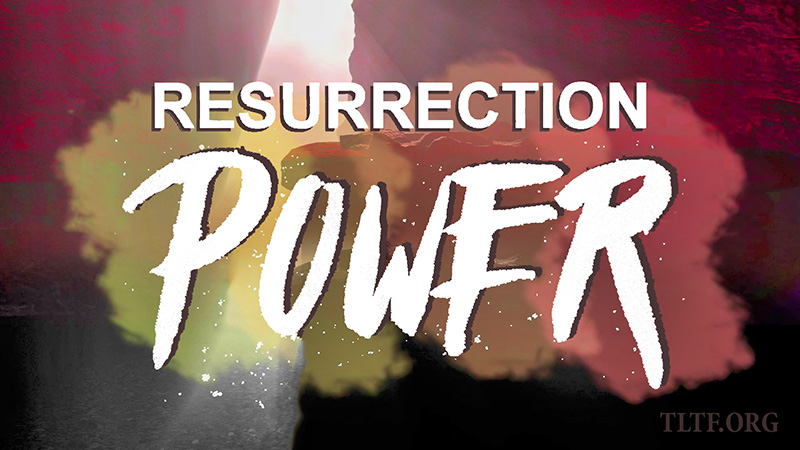 Even if you are a young person, it is likely that the sting of death has pierced your heart. No doubt you remember where you were and what you were doing when you got the news, “Your father/mother/brother/sister/wife/child is DEAD,” and the thudding finality of those words hit you like a locomotive.

This coming Sunday the Christian world will celebrate the only solution to the universal problem of DEATH: the glorious Resurrection of Jesus Christ, the only human being ever to defeat man’s ultimate enemy (1 Cor. 15:26). And via our simple trust in him as our Lord and Savior, we have his guarantee that we each will make a YOU-turn on the road to death.

John 5:24
“Most assuredly, I say to you, he who hears my word and believes in Him who sent me has everlasting life, and shall not come into judgment, but has passed from death unto life.”

It is significant that the Devil’s first lie was that there is no such thing as death (Gen. 3:4). And it is disappointing, to say the least, that his lie is being incessantly repeated by most all Christians, who believe that death ushers a believer into the presence of God in some incorporeal form. Why the lie? To minimize the horror of death, of which Satan is the author (Heb. 2:14), and thus dilute the glorious truth of RESURRECTION. For if death is not “the end of life,” as defined in every language, the idea of resurrection is at best superfluous, if not ridiculous. Maybe that is why God then immediately announced the death and resurrection of His only begotten Son (Gen. 3:15).

In both One Day with The Creator (Segment 10, Part 2) and Jesus Christ: The Diameter of the Ages (Segment 3), I exposit Hebrews 2, and show how it emphasizes the crucial biblical truth that Jesus had to be a fully human being so that he could die, and thus pay the price for the sins of mankind. In case you’ve not heard, GOD cannot die.

Hebrews 2:9
But we see Jesus, who was made a little lower than the angels, for the suffering of death crowned with glory and honor, that He, by the grace of God, might taste death for everyone.

Hebrews 2:14-15
14 Since the children have flesh and blood, he too shared in their humanity so that by his death he might break the power of him who holds the power of death—that is, the devil— 15 and free those who all their lives were held in slavery by their fear of death.

Hebrews 2:17
For this reason he had to be made like them, fully human in every way, in order that he might become a merciful and faithful high priest in service to God, and that he might make atonement for the sins of the people.

The inspiring exploits of the first-century Christians in the Book of Acts make it clear that as ambassadors for our Lord Jesus, the keynote of our lives is that you and I are simply to be witnesses of his Resurrection, which we can do in both word and deed. Here are some examples of that truth:

Acts 1:22
For one of these must become a witness with us of his resurrection.

Acts 3:15
[You] killed the Prince of life, whom God raised from the dead, of which we are witnesses.

Acts 4:2
They were greatly disturbed because the apostles were teaching the people, proclaiming in Jesus the resurrection of the dead.

Acts 4:10-12
10 Then know this, you and all the people of Israel: It is by the name of Jesus Christ of Nazareth, whom you crucified but whom God raised from the dead, that this man stands before you healed. 11 Jesus is “the stone you builders rejected, which has become the cornerstone.” 12 Salvation is found in no one else, for there is no other name under heaven given to mankind by which we must be saved.

Acts 13:29-30
29 Now when they had fulfilled all that was written concerning Him, they took Him down from the tree and laid Him in a tomb. 30 But God raised Him from the dead.

Acts 25:19
Instead, they had some points of dispute with him about their own religion and about a dead man named Jesus who Paul claimed was alive.

Called on the carpet by King Agrippa in the waning days of his ministry for preaching Jesus and the resurrection, Paul asked him a logical question that embodies the crux of Christianity:

Acts 26:8
Why should it be thought incredible by you that God raises the dead?

During his earthly ministry, Jesus demonstrated the reality of resurrection on numerous occasions by raising people from the dead. In so doing, he gave us a “Preview of Coming Attractions,” that is, when he eventually raises up all deceased believers to newness of life. I particularly love the record in Luke 7:11-17, when he interrupted a funeral procession (no doubt with one cop on a donkey at the beginning and one at the end to stop traffic) and cancelled the event! I wonder if any woman initially muttered, “Aw, now what am I gonna do with the casserole I made?” Hey, you can serve it at the RESURRECTION PARTY!

I don’t know exactly when I got born again, but perhaps you do remember your personal “resurrection,” as it were, the moment when you went from death unto life. Ironically, becoming an effective ambassador for Christ now requires each of us to “die daily.” In Philippians 3:10-11, Paul declared that his desire was, “that I may know Him and the power of His resurrection, and the fellowship of His sufferings, being conformed to His death, if, by any means, I may attain to the resurrection [out] from [among] the dead.”

The context shows that he cannot be speaking of a physical resurrection, but rather a newness of spiritual maturity—growth in one’s life as a result of selflessly sacrificing for the sake of another. 2 Corinthians 4:10-11 expresses that same principle. And as per Romans 6:5-11, we can “reckon ourselves dead to sin and “alive to God in Christ Jesus our Lord.” As a side note for you to consider, someone recently suggested to me that, as per Isaiah 53:5, we can reckon ourselves dead to sickness also.

The manifestation of speaking in tongues gives us the absolute assurance that our Lord is coming back for us, and that we will live forever in a resplendent Paradise beyond our imagination. That is our HOPE, and it might happen today. Until then, The Man in whom you have put your trust has his arms around you as you walk through this tumultuous world. He is your constant companion, your personal friend, and your consultant, comforter, healer, mentor, and guide.