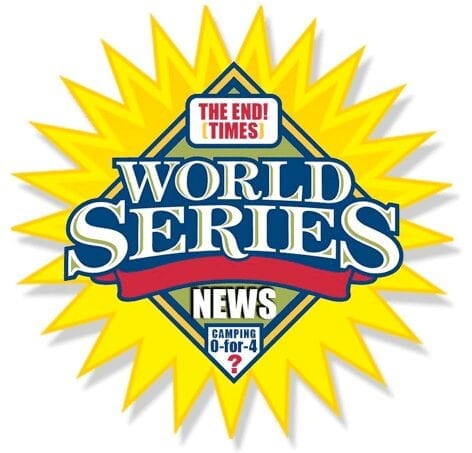 Harold Camping is a radio preacher who reportedly predicted “the Apocalypse” in 1988 and then again in 1994. Of course nothing like that happened then other than the Clinton presidency.

Earlier this year Camping claimed to have used Bible verses to calculate May 21 as the date for the “Rapture” of all Christians, which was to be followed by the destruction of the planet on October 21. When Christians did not blast off in May, Camping revised his prediction to state that both events will occur on October 21. I’m writing this on October 22—from a still-intact earth.

There is rampant confusion among Christians about “Eschatology,” that is, the chronology of “end times” biblical events that will conclude life as we know it on earth and usher in the true “New Age.” For example, Tim LaHaye, co-author of the best-selling “Left Behind” novels about the end times, called Camping’s May prediction “100 percent wrong,” citing Matthew 24:36 (NRSV): “But about that day and hour no one knows…” except God. LaHaye was right about Camping being wrong, but he does not understand that Jesus’ statement in Matthew has nothing whatsoever to do with Christians or the Rapture.

There are so many biblical holes in Camping’s theory that space prohibits even listing them. Suffice it to say that there is a primary reason why Camping, LaHaye, and many other Bible teachers past and present who are expounding upon “Eschatology” continue to add to the confusion.

In a nutshell, Scripture says that the next major spiritual happening is the gathering together (aka “Rapture”) of all Christians to meet the Lord Jesus in the air (1 Thess. 4:13–17), and there are no signs that precede that glorious event, which could take place at any moment. Then comes the Tribulation (aka “the time of Jacob’s trouble”—Jer. 30:7 – KJV), which lasts for seven years (Dan. 9:24–27), when Satan tries to destroy true Israel.

At the end of the seven years, the Lord Jesus comes back to the earth (Zech. 14:3) with all Christians and raises all Old Testament believers from the dead (Ezek. 37:1–14; Rev. 20:5). He wins the Battle of Armageddon, locks up the Devil and his evil spirits (Rev. 20:3) and rids the world of all wicked people for the next 1000 years while he rules the earth from the land God promised Abraham and his descendants, and which Jesus will then give them (Rom. 15:8).

At the end of the 1000 years, Satan is loosed from his prison, whereupon he goes forth to deceive millions of people, making one final assault on Jerusalem. God sends fire from heaven and destroys them (Rev. 20:7–9).  Then He destroys Satan in the lake of fire (Rev. 20:10; Ezek. 28:18).

Then the Lord Jesus will raise from the dead every other human being who has ever lived, those not raised at the Rapture of the Church or the Resurrection of the Just. He will righteously judge and destroy all wicked people (Rev. 20:11–15). Then he will create a new heaven and a new earth (Rev. 21:1ff), and the saved of the ages will forever enjoy a glorious life.

It is only in this current “administration of the secret” (Eph. 3:9) that people who confess Jesus as Lord and believe that God raised him from the dead (Rom. 10:9) are instantly “born again of incorruptible seed” (1 Pet. 1:23 – KJV) and guaranteed of everlasting life in Paradise.

If you have never made Jesus Christ your Lord, you can do so right now, and then rest assured that you are saved from sin and death. As a part of his Body, the Church, you will be gathered up and given a new body when he comes to rescue us from this present, evil age (Gal. 1:4). Amen.

All of this, and more, is set forth in our about-to-be-released 6-hour video presentation titled “The End!” (Times), subtitled, “Good News! We Win!” It begins with three hours on The Administrations in Scripture and concludes with three hours on all of 1 & 2 Thessalonians.

Using a gorgeous 5’ x 9’ overview of Genesis through Revelation (“From There to Eternity”), John Lynn powerfully sets forth God’s Truth about what lies ahead for Christians, and the world. His teaching of The Administrations Chart is expansive, eye-opening, and extremely entertaining. Understanding what parts of the Bible are written TO WHOM—Jews, Non-Jews (“Gentiles”/”Greeks”), and Christians—past, present, and future, is indispensable to you maximizing your spiritual potential and living a fruitful Christian life.

John’s verse-by-verse exposition of Paul’s heartfelt epistles to the Thessalonians, a model Christian community, is loaded with both biblical and practical insight. It magnifies the Christian’s true Hope and thus gives us great motivation for daily living in a dying world.

Considering people’s widespread fascination with the “End Times” and the great number of “prophetic” ministries in Christendom teaching so many different things, this seminar is a must for those who want to know that they know how the book ends and everlasting life begins, and what to do in the meantime.